Charles Kenworthy born in Philadelphia, United States of America. He graduated from Pennsylvania Medical College in 1846. Emigrating on the Panama he arrived in Victoria on 8 June 1853. .[1]

His pen name was Al Fresco.

He attended the Thanksgiving Dinner in honour of the American Consul, James Tarleton which was held at the Victoria Hotel, Red Hill on the 20 November 1854, and gave a toast to the Diggers of Victoria. [2]

He was an intermediary for the Americans taken at the storming of the Eureka Stockade. He helped organise the release of American miner Charles Ferguson. [3] 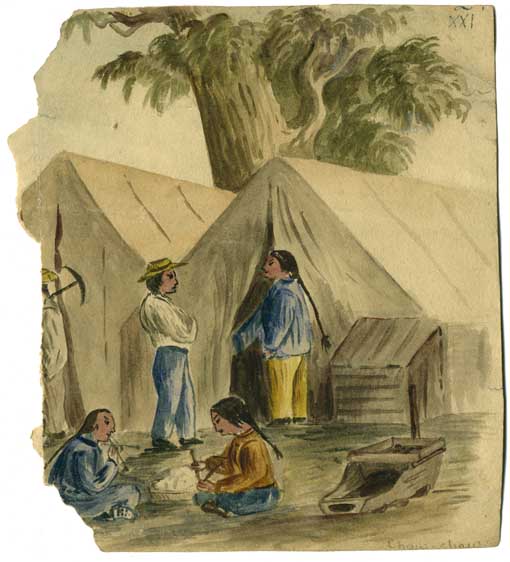 Charles A. Doudiet, Chow Chow (Chinamen on Ballarat), c1854, watercolour, pen and ink on paper.
Courtesy Art Gallery of Ballarat, purchased by the Ballarat Fine Art Gallery with the assistance of many donors, 1996.

On 23 December 1854 Dr Kenworthy gave evidence to the Commission on the Chinese in Victoria describing the Chinese as ‘the greatest nuisance on the diggings’ adding that ‘I think they are sober and industrious and quiet, but I am satisfied from personal observation, that they are a set of thieves’. On 16 July 1856 he was elected Honorary Surgeon at the Ballarat Hospital – at that time he had rooms on Sebastopol Hill. Kenworthy was also a popular lecturer at the Mechanics’ Institute, the first President of the Ballarat Horticultural Society in 1859, and the inventor of some mining equipment.[4]

Dr Charles Kenworthy gave evidence during the 1855 Goldfields Commisssion. He was an American who was to figure prominently in the separation of Sebastopol from Buninyong. He was elected to the Road Board in 1860. [5]

Dr Charles James Kenworthy was naturalised as an Australian citizen on 27 Nov 1861 in order to buy land. On his naturalisation certificate he states he is 37 years of age in 1861 which would mean he was born around 1824.[8]

The Sebastopol Mechanics' Institute was opened on Thursday 28 April 1864 at 7.00 o'clock in the evening. Dr Charles Kenworthy occupied the chair. The land on which the building stands was applied for on behalf of the committee by Dr Kenworthy, to whose strenuous exertions the success of the movement is mainly to be attributed; while the Mexican Gold Mining Co, on whose claim the ground is situated has kindly consented to its alienation. [9]

On 2nd Dec 1864, he was given a "tea and coffee service" in appreciation of his services to Sebastopol. Dear Sir, As you are about leaving this colony we embrace the opportunity of presenting you with a Tea and Coffee Service As a slight token of the esteem and respect in which you are held by the inhabitants of Sebastopol. It is with sincere regret you are about to leave us for, during your lengthened sojourn in our midst, your numerous acts of kindness have endeared you to many, and your energetic career has materially assisted to make Sebastopol what it now is, one of the most important mining townships in the colony of Victoria.