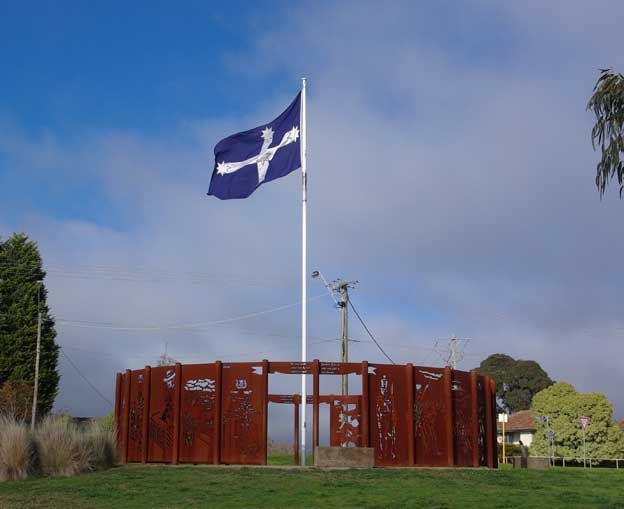 Anton Hasell, Eureka Circle. This sculpture was erected in the Eureka Stockade Memorial Park to celebrate the 150th anniversary of the Eureka Stockade. The sculpture comprises of 20 steel panels depicting the Eureka story. Dr Hasell said he designed the interpretive sculpture with the intention of creating an experience facing every miner on the goldfields at that time - either to join in or to stay out. The artist wanted visitors to experience the feeling of entering the barricade, to cross a line with many layers attached to it. [1]

(Also called the Eureka Stockade Researve) In the late 1860s, and following requests from some old residents, the mayor of Ballarat East, Emanuel Steinfeld, sought the proclamation by government of a reserve on the site of the Eureka Stockade. In a formal request to the District Surveyor in November 1869, the Town Clerk identified a piece of land (the current site of the reserve). this was received favourably by the government and the land was formally gazetted in April 1870. Prior to 1885 the site was known as the "Eureka Street Stockade Reserve". It was officially gazetted in 1885 as the "Eureka Park and Garden" and placed under the control of the Ballarat East Council.[2]

On 7 February 1912 forty seven people attended a meeting at the Ballarat East Town Hall convened by Frank Penhalluriack who was very concerned about the unkempt state of the Eureka Stockade Reserve. [3]

a. To create a national spirit and patriotism by enlisting the sympathy of the Government and Citizens of the Commonwealth;
b. The annual celebration of the fight for liberty which took place at eureka on 03 December 1854;
c. the beautification and maintenance of the Eureka Stockade Reserve.[4]

1917 the Levy Fountain was presented by Major Levy, and is situated between the main Eureka Street entrance and the Eureka Memorial.[5]

In 1926 the Eureka Hall was constructed on Stawell Street, Ballarat East.[6]

In 1935 previous reservation orders were revoked when to reserve was proclaimed as a site for a public park and recreation. it was to be known as the Eureka Stockade Reserve. The reservation was for an area of 13 acres, 3 roods and 2 perches, which include a closed portion of Rodier Street The Ballarat City Council was appointed Committee of Management of the reserve.[7]

In 1970 the timber diorama was built by local Rotary Clubs.[8]

In 1983 3800 square metres of land was added to the reserve on its northern boundary. This followed the re-alignment of Charlesworth Street and the compulsory acquisition of lot 18A by the Council in 1978.[9]

After the surrender of part of the railway land to the Crown in 1998 a further 1511 square metres was added to the western perimeter. [10] 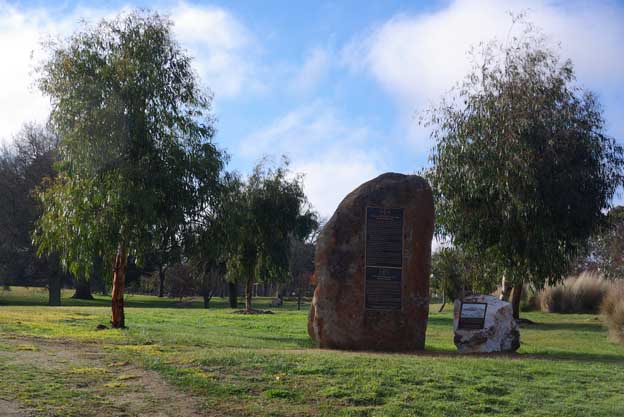 The caravan park was set up in 1950 when land at the north-east of the reserve became available due to the closure of the railway branch to the Eureka Tiles factory.[12]

In the summer of 1932 the Reserve gained popularity when permission was granted for swimming in Lake Elsworth.[13] In 1935 the lake was converted into a swimming pool [14] was completed at a coast of 20,000 pounds, which was expended in sustenance money in grading the reserve and digging out the pool, the Eureka Reserve Committee paying for all materials used. It was officially opened on 21 January 1935.

The swimming pool was used by the public until 1964 when it was closed by the Council and health officer. This was due to the discovery of considerable faecal pollution in the unchlorinated water, and deemed potentially dangerous if allowed to continue to operate. [16]

During the 1970s the Park Committee raised $80,000 for the cost of a 50 meter concrete swimming pool and a learner's poll. This pool replaced the Lake Elsworth recreational pool. IN NOvember 1971 the tender of $93,887 was accepted from W.B. Trahar Pty Ltd to construct the Eureks Stockade Swimming Pool.[17] 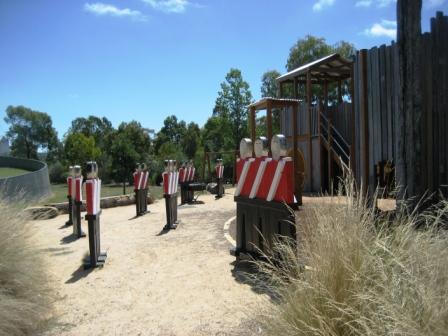 The brick kiosk was erected in the reserve at a cost of 400 pounds, totally paid for by the Eureka Stockade Association. The building was closed in 1972 after the opening of the kiosk at the nearby Olympic swimming pool. It was subsequently used as a barbecue shelter until its demolition in c1978.

In 1992 the Victorian State Government assisted the City of Ballarat to raise $3.1 to erect an interpretation centre. The Eureka Stockade Centre opened in 1994.[20]

The Eureka Hall was erected by the Eureka Stockade Committee in 1927. The Helen McKay Memorial Gates and Fence were erected in 1953.