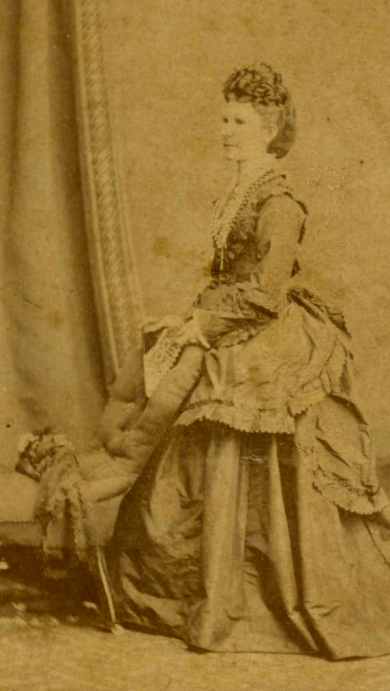 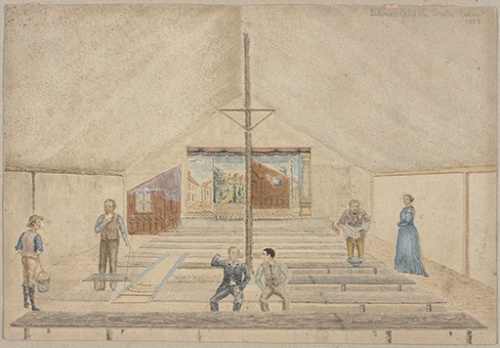 Thought by many to be American Sarah Ann McCullough was born in London, England in 1827, the daughter of London Merchant William McCullough.[1]

Fourteen year old Sarah fell pregnant to accountant Frederick Ford and was sent away to Whitehall, Westminster to have her baby, Julia.[2] Unlike many women of that era Sarah kept her baby. Sarah married Comedian Henry Augustus Leicester Hanmer on 10 August 1844 while living in Bagnigge Wells. [3] The young child was given the name Julia Ford Hanmer.[4] Julia was to marry William Surplice, and both were present at Ballarat in 1854, and went on to lead lives of much interest and adventure.[5]

Sarah, her brother and her daughter, Julia arrived in Melbourne on the Lady Flora in 1853. It is thought they travelled via the Canadian goldfields where Sarah Hanmer may have picked up an American accent. She arrived in Ballarat without her husband, but was accompanied by her brother and daughter. [6]

Sarah was known as Sarah Hanmer, Mrs Hanmer and Leicester Hanmer, she was an actress of some note at Ballarat running what is referred to as Mrs Hanmer’s Theatre at Red Hill[8]. In 1854 she started the Adelphi Theatre[9] in Esmond Street (initially a tent but later a weatherboard that became known as The Windsor).[10] Mrs Hamner became famous in vaudeville and melodrama.[11]

Sarah advertised in the Geelong newspapers. ADELPHI THEATRE - Main Road - Mrs Leicester Hanmer has the honor to announce to her friends the public, that she is about opening at the above place on or about the 15th instant, in a style worthy of herself and the colonies.[12]

She also wrote to the Ballarat Star.

Advertisement: MRS. HANMER TO MR. BARTLETT.
Mr Bartlett is a sillier little gentleman than even I suppose him if he imagines the public feel at all interested about him. And I should not have done a person of his very moderate pretensions the honor of noticing him, but that he has been cowardly enough to insinuate what he does not speak out openly about - my character. - I here challenge him to say I am other than an honest, virtuous woman, in the stricktest sense of the words.
As to what parts of the letter, Mr. Bartlett threatened he would send in his resignation and I had seen so much of his inexpedibility - his stammering - and the audience ?? I most cheerfully accepted it.
And as to my being a weak minded woman, that should excite his pity though weak-minded as I am , I was too weak for him. And the fact of the Theatre Balls being sent to town a fortnight in advance is a proof that the business of the Theatre is envied on in a systematic moment, or such could not be the case. And Mr. Bartlett not being consulted on the matter, was most decidedly and distinctly because he was not of sufficient consequence.
I have the honor to be,
The Public's Obedient Servant,
S. A. LEICESTER HANMER
P.S. My company very kindly wished to send a card with their signatures attached, as to my unfeeling conduct with regard to money matters, &c., &c., I answered them with a paraphrase of Shakespeare, "For this Hanmer has borne herself so honestly in her great office, that her virtues will speak trumpet ?? against the deep damnation of her slanderers."
Adelphi Theatre,
Red Hill, August 28, 1854. [13]

Charity events were regularly held at Mrs Hanmer's theatre, such as a benefit for the Miners’ Hospital on 11 October 1854. On 30 October 1854, a benefit concert at the Adelphi raised over £70 for the Diggers Defence Fund. [14]

Members of the Ballarat Reform League were scheduled to meet at the Adelphi Theatre at 2.00pm on Sunday 3 December 1854 to elect a Central Committee.[15]

BUNINYONG RACES - On the race-course there were three refreshment booths; the first, which was in connection with the grand stand, being kept by Mr Jamieson, of the Buninyong hotel, the second by Mr Skinner, of the Royal Exchange Hotel, Buninyong, and the third belonging to Mrs Hanmer, who drove a roaring trade amongst her old Ballarat acquaintances. [18]