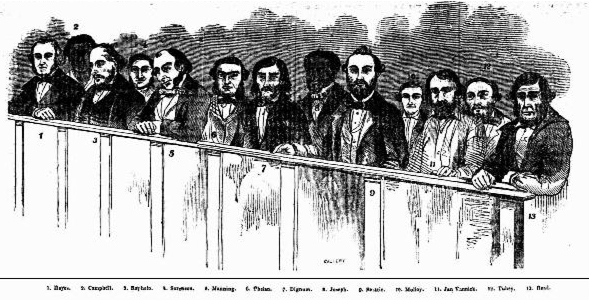 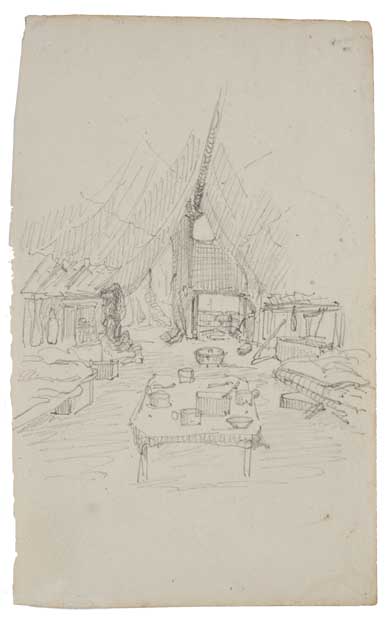 Timothy Hayes was born at Kilkenny, Ireland. He married Anastasia Butler, and they later sailed to Melbourne in 1852 with their five chldren on the Mobile. [1]

Timothy and Anastasia Hayes lived close the the Eureka Diggings. The site of their tent was in King Street close to Victoria Street. [2]

Described as 6 foot tall Timothy Hayes was the leader and Chairman of Bakery Hill Meeting 29 November 1854. He was elected Chairman of the Ballarat Reform League after a unanimous vote. According to John Lynch Hayes was always voted to the Chair at important occasions. Hayes worked with Peter Lalor at Eureka, and the couple were living at St Alipius by 1854 where Anastasia Hayes was teaching.[4]

Hayes signed the Catholic Petition complaining about the treatment of the priest’s servant, Gregorius. He was arrested on 3 December 1854, around 100 yards from the Stockade, and tried during the Treason Trials on 19 March at which time he was acquitted. The witness against Hayes was Trooper Goodenough. Hayes’ counsel was Richard Ireland, assisted by Thomas Cope. [5]

Collins St West
15 January 1855
Sir,
The Queen V Hayes
I do myself the honor to request permission for the bearer Mr Woolcott my clerk to wait upon His Excellency to serve him a copy Subpoena as a witness on the trial of this cause. I trust His Excellency will not consider this proceeding in any way disrespectful towards him, as I am acting entirely under the advice of Counsel who consider his evidence most material to the Prisoners defence.
I am
Sir
Your most obedient humble servant
(J.W.?) Grant

Timothy hayes was the third person tried for High Treason. A new list of 178 potential jurors, 6 small businessmen, 3 tradesmen, 1 gardener and 2 farmers were chosen to judge Timothy Hayes, a man who all of Victoria believed was one of the ringleaders behind the Eureka rebellion.[7]

Timothy Hayes was defended by Richard Ireland, the judge was Redmond Barry, the same Redmond Barry who 20 years later sent Ned Kelly to the gallows. The scene was set for an interesting trial. Timothy Hayes was Peter Lalor's mining partner. He had been the chairman of the final mass meeting at Bakery Hill on the 29th November 1854. He had stood up and whipped up the crowd into a frenzy by calling out "your liberties, will you die for them!!" The crowd roared its approval and burnt their licenses.[8]

Henry Goodenough and Andrew Peters, the two police spies gave their evidence. Henry Goodenough told the court he heard Hayes ask the crowd to fight for their liberties. On cross examination he agreed he had asked other miners to do the same thing. Father Patrick Smyth the Catholic priest swore that Hayes had gone to the Catholic chapel during the attack at the stockade. Henry Foster the Inspector who arrested Hayes told the jury he arrested him 300 yards from the Eureka Stockade and he had a current miner's license on him. Fortunately for Timothy Hayes, the jury liked what they heard and acquitted him of the charge within thirty minutes of sitting down to consider their verdict. Once again another prisoner who has escaped execution, was carried through the streets of Melbourne.[9]

During the Treason Trials the issue of taking oaths to a flag which was not the flag of Great Britain became a point of legal argument. Timothy Hayes was charged with acting under a rebellious flag which was treasonable to Queen Victoria. His defence lawyer pointed out that the Prosecutor, William Stawell, the Colony of Victoria's Attorney general, had acted under the Anti-Transportation League banner flown in Melbourne in 1851. This legal argument helped secure the acquittal of Timothy Hayes. [10]

Hayes later became the Town Inspector for Ballarat East and was appointed a special constable in 1862. He and his wife Anastasia Hayes parted company in 1862, he went overseas to Chile, Brazil and the United States returning in 1866. Anastasia Hayes was left to look after their five children Edward, May, Nanno, William and Anne on her meagre school mistresses salary. Timothy Hayes returned to Melbourne in 1866 and worked on the Melbourne Railways till he died.[11]

Hayes attended the 2nd anniversary of Eureka. He was later the Town Inspector for Ballarat East, and was an authority on military engineering. Hayes left Anastasia, travelled to to California, then returned to Australia working on the Railways in Melbourne.

… Mr Timothy Hayes of Eureka Stockade and State Trial notoriety, and one time an officer of Ballarat East, was also supposed to be defunct, but has recently returned from a tour through parts of South America and California, and seems as stout and jolly, and good tempered as ever, walking down Collins Street, looking very much alive to passing events, and enjoying the joke of being supposed dead. [12]

Charlie Napier Hotel, 10th October, 1856
(To the Editor of of the Star)
Sir, - In the report of Mr Humffray’s speech, delivered by him at the Charlie Napier on Thursday, he is stated to have made use of language so derogatory to my character, that at my request a friend waited upon him to ascertain whether of not the report was correct.
He denies the accuracy of the report, and utterly disclaims all intention of imputing the charge to me, May I request that you will, as a matter of justice to me, give insertion to his letter in contradiction to the report in the paper.
I am, Sir,
Yours obediently,
T.Hayes.[13]

TO MR. T. HAYES (Per favor of the Star)
Dear Sir, - My attention has been called to a report in the Miner of this morning; wherein I am reported to have said - “Hayes’ charge that he (Mr Humffray, J.B.) had refused to attend and give evidence or advice in his favor was a wicked and cruel lie.” This report is not correct, inasmuch as my words applied to the attorney or those on his behalf who had made the statement to you to the effect that I had refused to give evidence on your behalf, and I now utterly disclaim all intention of for one moment applying the charge to you.

Riot at Ballarat appointed to enquire into circumstances connected with the late disturbance at Ballarat together with the evidence taken by the board laid upon the Council table by the Colonial Secretary, by Command of His Excellency the Lieutenant Governor and ordered by the Council to be printed 21st November, 1854.