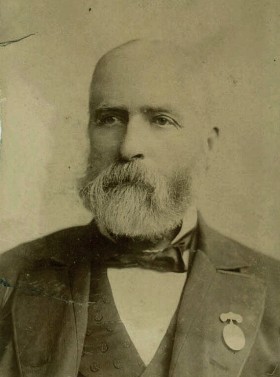 William Irwin was born in September 1832 at County Tyrone, Ireland. He emigrated to Sydney, New South Wales, on 9 February 1850. Irwin was engaged as a teacher at St. James’ school, Elizabeth St. for 6 months before moving to King’s school, Parramatta. Irwin worked on the Turon gold field for 12 months in 1851 before returning to Sydney, and then with four others came to Victoria on the brig Faugh-a-ballagh. [1]

Irwin and his party arrived at Geelong then moved onto Ballarat where they commenced digging for gold at Little Bendigo on 30th August. They continued working until August 1854, when in conjunction with McCrae & Eva the Star Hotel was built on Main Road. This hotel is well known for its connection with the Eureka Stockade. [4]

The Star Hotel burned down in June 1861, and Irwin lost all his property. After occupying the John O’Groats Hotel for 18 months he built the Provincial Hotel in Lydiard Street, Ballarat. This was sold in 1872 to allow the railway to extend. Irwin then purchased a house and land from John Cornish and called this the Provincial Hotel. Irwin was one of the oldest hotelkeepers in Australia having held a license continually for 34 years. Irwin was appointed a Justice of the Peace at Ballarat. [5] 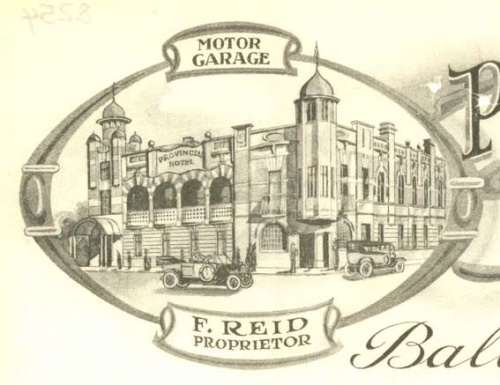 DEATH. Irwin -On the 22nd inst, at his residence, the Provincial Hotel, Lydiard-street, Ballarat, William Irwin, aged 62 years. A resident of Ballarat for over 40 years. [6]

Mr. William Irwin, of the Provincial Hotel, Lydiard street, died this morning, after a short illness, from congestion of the liver. The deceased gentlemen was one of Ballarat's early pioneers, and at one time was president of the Ballarat District Licensed Victuallers Association, of which he continued to be a prominent and active member up to the time of his death. He was always a strong supporter of mining, and was director of a number of companies. The deceased who was 61 years of age, leaves a widow and grown up family in comfortable circumstances.[7]

Mr. William Irwin, a very old resident of Ballarat, proprietor of the Provincial Hotel and a director of the Last Chance, Praker's United, North Woah Hawp and other mining companies, died recently, deeply regretted, at Ballarat.[8]

The Star on 11 September 1856 published a report of the dissolution between William McCrea, Simeon Davey and William Irwin of the Star Hotel, Main Road. The partnership was dissolved on 23 August 1856 and Mr Irwin was to carry on the business of the Star Hotel. [9]

BIRTHS. On the 17th instant, at her residence, Star Hotel, Main Road, the wife of William Irwin, of a son.[11]

BIRTHS. On the 21st July, at the Provincial Hotel, Lydiard street, Mrs William Irwin, of a daughter, still-born. [12]

ORANGE DEMONSTRATION IN BALLARAT. One of the largest and most brilliant gatherings that ever graced the Alfred Hall was that which assembled on Wednesday evening to celebrate the anniversary of the Battle of the Boyne (the 12th of July.) For some time past this demonstration formed a theme of conversation among the majority of the residents of Ballarat, and when it was announced that many of the leading men of the district would take part in the ceremonies, the greatest of interest was manifested in the proposed commemorative festivities. The interior of the hall was profusely decorated with flags and emblems, and a very elaborate programme was drawn up for the occasion. It comprised a tea, concert, speech-making, and a ball. The tea meeting was one of the largest gatherings that ever sat down to a repast in Ballarat. Over 1,000 persons, comprising a very large number of the fair sex, sat down to tea. The Rev Mr Kearns, the grand chaplain, said grace. There were about 1,500 persons present at the concert and speech making, and the entertainment proved a highly successful and enjoyable affair. Among the audience were scores of members of the Loyal Orange Lodge of Ballarat, Ararat, Creswick, and other places, wearing their regalia. The gay colours of the sashes had the effect of giving u grand appearance to the scene. On the platform we noticed Bros. W. T. (J. Kelly, Rev. Kearns, Rev. J. A. Stuart, James Russell, R. T. Vale, John James, M. L.A., and T. Walker. The secretary received an apology for the absence of Mr Henry Bell, M.L. A., who was suffering from indisposition. The deputy grand master, Bro William Irwin, occupied the chair. The brief speeches delivered by the brethren on the platform were of an eloquent and forcible character, and were loudly applauded by the vast assemblage. Mr Russell spoke upon the necessity of the people of the colony endeavoring to uphold and preserve the present Education Act, which he considered to be one of the greatest boons ever conferred upon the inhabitants of this colony. The present system of education was the only means at command to bring the rising generation out of darkness, and in consequence it should receive the support of the colony at large. The procession which took place during the evening was a really grand and impressive sight, and one that will not soon be forgotten by those who witnessed it. A line of two deep was formed in the small room in connection with the Alfred Hall. As the brethren formed "two and two" they marched into and around the large hall until the starting point was reached, when they formed into single file, crossed hands, and enthusiastically responded to the usual charge, viz, " May this chain never be broken." Altogether the celebration was one of the most important demonstrations ever held in the Ballarat district.[13]