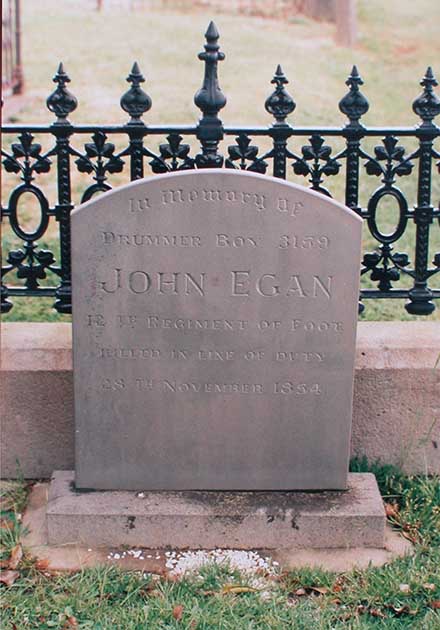 Drummer John Eagan, born Athlone, Ireland in 1839. He enlisted as a thirteen year old on 10 February 1852. He was promoted to Private shortly after the Eureka Stockade and re-appointed Drummer in May 1856. Between 1854 and 1860, Eagan had been confined to cells on a couple of occasions and had also been on Sick Report in February 1860.[1] John Egan died from a heart related condition, aged 21 years, under the name John Eagan, on 8 September 1860 at Victoria Barracks, Paddington, Sydney, New South Wales. He was buried in the Roman Catholic section of the burial grounds.[2]

Private John Egan (3059) was a drummer boy with the 12th Regiment. As the regiment were passing through the Eureka Diggings on 28 November 1854 John Egan was shot in the thigh.[3]

Pre-Eureka Incident - 28 November 1854
“The onslaught upon the troops appears to have been unprovoked and savage, and it excited general disgust in the minds of the colonists everywhere out of Ballarat.” Walter Bramwell Withers in his History of Ballarat was referring to an incident on the 28 November, 1854. The publican of the London Hotel, Benden Sherritt Hassell was shot in the leg. During the same fracas the drummer boy of the 12th Regiment, John Egan, was shot in the thigh and George Young, who owned the waggons, was also injured. Raffaello Carboni described it as a “cowardly attack” by the miners. They had thrown stones and bottles at the troops on their way into Ballarat between nine and ten o’clock on this dark November evening and allegedly had fired shots into the crowd.
Assistant surgeon of the 12th Regiment, George Arden reported, that “as soon as we got into the diggings a mob of diggers collected and assailed us with cries of Joe! Joe!” “We were pelted with large stones and bottles. … One of the carts was capsized, the driver and two men were severely injured, the men were turned out and ordered to load. We found two men missing and a party went back to find them. They were laying [sic] off the road badly wounded. When the soldiers turned out and loaded the crowd dispersed. … We were shortly after joined by the 40th men from the Camp. During the disturbance several shots were fired by the diggers, but the military never returned the fire. … Our Drummer boy was shot in the leg.”
Lance Corporal George Sharpe, also of the 12th Regiment corroborating the evidence of the assistant surgeon said, “ I was with the third cart from the rear when the mob attacked us, with stones, sticks and bottles. I heard some shots fired by the diggers; some shots were fired at us. I am quite certain that none of the soldiers fired a shot. I never heard any Officer ask the road to the camp. The drivers appeared to know the way.”
One of the main arguments for compensation for Mr Benden Hassell was that the drivers asked him the way to the camp. This subsequently was the reason that he was shot in the leg, because he was in the middle of the road, and in the firing line. It was argued therefore that it was the government who should be responsible for compensating him for his injuries. However the witnesses deposed that the shots were fired by the insurgents and that the military had loaded, but not fired a shot.
The reasons for the Military proceeding through a hostile area late on a dark night were dubious. They had left Melbourne at 5 o’clock on the previous evening, and arrived at the Ballarat Diggings “around 9 or 10 o’clock” the next night. This was usually a three day march, so the troops arriving at the Eureka Lead were “jaded” and “marching very slowly.”
The Melbourne Argus reported that “a portion of the military force despatched from town on Monday had arrived, [at Ballarat] and that in passing through the diggings the soldiers were pelted with broken glass and other missiles by some diggers. The military received this manifestation of feeling in the best possible temper, and did not attempt to irritate the mob by indulging in gestures or movements which might be interpreted to mean other than a friendly inclination to them.” … “a poor drummer was shot through the leg – are these deeds which will enlist the sympathy of an intelligent people? Is the maiming of a drummer boy a worthy triumph for a large mass of a British population who wish to occupy a creditable position in the eyes of the world? Surely not!”
Nothing was written about the injury to Benden Sherritt Hassell, although he also was shot during the same incident as the drummer boy and George Young, the carter. Hassell and his partner, Robert Monckton, were co-owners of the London Hotel. Later some of the wounded sheltered at the London Hotel after the Eureka massacre.
Benden Hassell applied to the government for compensation in 1855, stating that “at night on the 28th of November, 1854, a detachment of soldiers with military stores arrived on Ballaarat, and as they were passing over that part of the diggings known as the Eureka – along the road leading by the London Hotel, the Officer in command enquired … the way to the Government Camp, on Ballaarat, and he [Mr. Hassell] went out into the road and gave the Officer the information desired … As he [Mr. Hassall] was returning into the Hotel after pointing out the way to the Officer he was shot in the leg.”
Timothy Doyle, surgeon on the Eureka Lead gave evidence that Mr. Benden Hassell was under his care “for a period of four months, labouring under the effect of a gunshot wound of the left leg, …, which severely incapacitated him from following his usual business; from the severe nature of this wound” he had not recovered. … “That the bullet” had “not yet been extracted from the limb; and from present appearances it is very probable that Mr. Hassall will have to undergo a severe surgical operation before there is any chance of his recovering [if at all], the active use of the wounded limb, or be freed from frequent attacks of excruciating pain.”
Mr. Hassell was “well known as a peaceable and loyal British subject, and in no way countenanced or aided in any manner the unfortunate disturbances which took place on the Eureka, either at the time he received the wound or on any subsequent occasion.”
Four hundred and eighty-six men signed the petition urging the government to consider compensation for such a worthy case. The Board, however, in determining the judgement, made a suggestion that a “small donation from each of the individuals” who had signed the petition would “demonstrate their sympathy with the petitioner [Hassall] in a much more intelligible form, and more advantageous to his interests”.[4]

There were 24 drummers attached to the 12th Suffolk Regiment. (Reel 3715) According to the Muster Lists of the 12th Regiment of Foot, John Egan, Regimental Number 3159, drummer, was in the regimental hospital for 21 days following his injury, during the period 1st October 1854 to 31st December 1854. (That is, the musters of the last quarter of 1854.) He was paid as a drummer at 1 shilling, 1 penny and 3 farthings per day to the 20th February 1855 during which time he spent one further day in the hospital. On the 21st February 1855 he was promulgated in Official Orders as Private. Later, in 1856 he was transferred with the 12th Regiment to Tasmania and was still there on 30th June 1860! [5]

p. 157: First mention of Officers "Detached to Ballarat" Previously - up to p. 157 detached to Sandhurst and Castlemaine.

p. 32 Death of Littlehales "from Winchester Parish of Winchester County"

3059 Eagan, John Number of voucher 3: 3 refers to the Quarterly Report of Courts Martial.

p. 85: Refers to the Hospital at Ballarat.

1 May: Appointed as Drummer via Brown - deserted

At the end of REEL 3718 we find that John Eagan/Egan 3059 spends many days absent and in Confinement. In October 1858 - 3 December 1858 he had been placed in confinement 29 August and released on 4 Sep, then to Barracks or Garrison Cells. On 31 December he is noted as a "Prisoner" and there are three entries for John Egan on p. 108.[6]

THE GRAVE OF THE DRUMMER BOY

In the Ballaarat Old Cemetery there is a gravestone, erected in recent years, to John Egan the drummer boy of the 12th Regiment of Foot. The inscription reads:

This tombstone stands in the same consecrated ground as the monument to the military who lost their lives at the Eureka Riots. However, John Egan did not die in the line of duty at Eureka. He survived the injury that he sustained on 28th November, and went on to be court martialled and to cause trouble in the 12th Regiment for many years. Despite the popularly held belief of the "death of the Drummer Boy", current research reveals that he was still alive and was in Tasmania almost six years after the events at Eureka. [7]

It is not known how the myth of the death of the drummer boy was instigated, but it could be due to reports such as the following:

Martin Cusack, who fought with the regulars at Eureka, died at Ballarat the other day an inmate of the local Benevolent Asylum—too common an end for a British soldier to invite comment. A few days before his death he gave the papers an interview, in which he described how the soldiers were exasperated against the diggers by the action of a negro who killed their drummer with a stone as they were marching into Ballarat. They resolved to avenge themselves by showing no quarter, he says. This may explain a little of the savagery which, old diggers insist, took place within the Stockade after the rioters were routed. The soldiers, roused to fury by this one act—an act for which the white men of the field could not beheld responsible for one moment—forgot the long and. persistent tyranny that had exasperated the men they were marching against. These few words of Cusack's throw a little light on the history of Eureka. It is the first time I have met with a confession that the soldiers had actually agreed upon a no-quarter policy.[8]