From eurekapedia
Revision as of 14:04, 22 May 2021 by Cgervaso (talk | contribs) (→‎Probably Signed in or Around Castlemaine)
(diff) ← Older revision | Latest revision (diff) | Newer revision → (diff)
Jump to: navigation, search 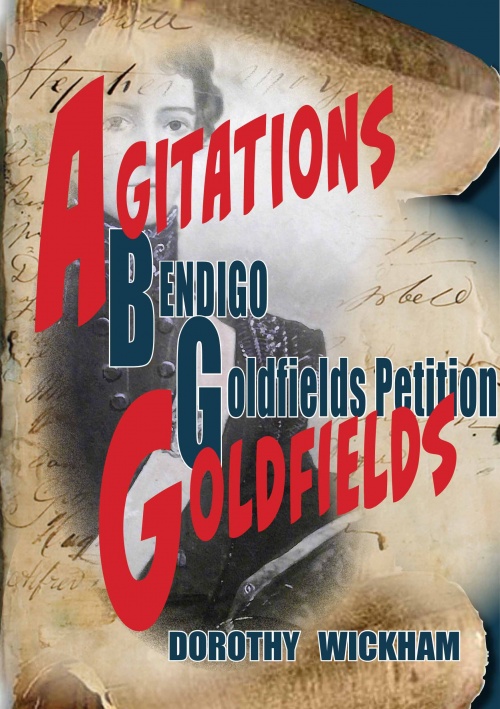 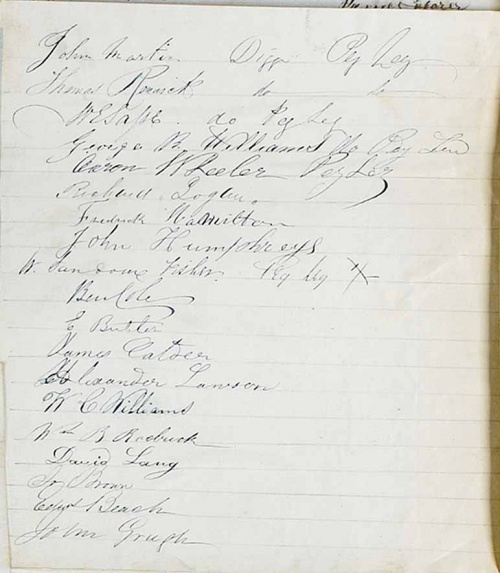 Signatures from PegLeg (Bendigo) on the 1853 Bendigo Goldfields Petition

Once thought to be lost, the Bendigo Goldfields Petition was discovered by chance lying in a pile of papers on a rubbish tip. Some 13 metres in length and bound in green silk, it is an important document for Victoria.[1]

The petition was signed by around 5000 diggers on the Victorian goldfields in mid-1853. At the time, the signatures represented about one in 12 diggers.[2]

In June 1853 an anti-gold licence association was formed at Bendigo to give voice to the diggers' many grievances about their conditions. The diggers were angry about the mining licence fees imposed by the government and the system by which they were collected.[3]

The petition was signed by miners across the state’s major goldfields and was brought to Melbourne and presented to Lieutenant-Governor Charles La Trobe on 1 August 1853. Most of its demands were rejected, including the reduction in the licence fee. Eventually the diggers' dissatisfaction erupted, culminating in the Eureka Stockade battle on the Eureka Lead at Ballarat on 3 December 1854.[4]

Dr John Chapman, a Melbourne collector, purchased the petition from its discoverer and presented it to the State Library of Victoria in 1988. Its discovery is particularly valuable for historians and genealogists investigating the history of social and political events during the gold rushes in Victoria.[5]

The Wording of the Petition

The words used in the Petition make it clear that the diggers, storekeepers and others on the goldfields are loyal and law abiding citizens. It appears abundantly clear that the problem lies with the high licences and the manner in which they are issued and collected on the goldfields. This is an eloquently written document containing a plea for equality and justice.

To His Excellency Charles Joseph LaTrobe

Esquire Lieutenant Governor of the Colony of Victoria etc

That these Petitioners are the Loyal and Devoted Subjects of Her Most Gracious Majesty Queen Victoria, the Sovereign Ruler of This Colony and of

That in the present impoverished condition of the Gold Fields the impost of Thirty Shillings a Month is more than Your Petitioners can pay as the fruit of their labor at the Mines scarcely affords to a large proportion of the Gold Miners the common necessaries of life.

That a consequence of the few Officials appointed to issue Licenses the Diggers Storekeepers and other residents lose much time at each Monthly issue on procuring these licenses.

That the laborious occupation of Gold digging and the privation attendant on a residence in the Gold fields entail much sickness and its consequent expenses from so doing.

That newly arrived Diggers must lose much time and money before they become acquainted with the process of Gold Mining.

That in consequence of Armed Men (many of whom are notoriously bad in characteriser) being employed to inform the impost of Thirty Shillings a Month there is much ill feeling engendered amongst the Diggers against the Government.

That in consequence of the non-possession by some of the Miners of a Gold Digger License some of the Commissioners appointed to administer the Law on the Gold Fields have on various occasions Chained non-possessors to Trees and Condemned them to hard labor on the Public Roads of the Colony - A proceeding Your Petitioners maintain to be contrary to the spirit of the British Law which does not recognize the principle of the Subject being a Criminal because he is indebted to the State.

That the impost of Thirty Shillings a Month is unjust because the successful and unsuccessful Digger are assessed in the same ratio.

First. To direct that the Licence Fee be reduced to Ten Shillings a Month

Secondly. To direct that Monthly or Quarterly Licenses be issued at the option of the Applicants

Thirdly. To direct that new arrivals or invalids be allowed on registering their names at the Commissioners Office fifteen clear days residence on the Gold Fields before the License be enforced

Fourthly. To afford greater facility to Diggers and others resident on the Gold Fields who wish to engage in Agricultural Pursuits for investing their earnings in small allotments of land

Fifthly. To direct that the Penalty of Five Pounds for non-possession of License be reduced to One Pound

Sixthly. To direct that (as the Diggers and other residents on the Gold Fields of the Colony have uniformly developed a love of law and order) the sending of an Armed Force to enforce the License Tax be discontinued.

Your Petitioners would respectfully submit to Your Excellency's consideration in favour of the reduction of the License Fee that many Diggers and other residents on the Gold-fields who are debarred from taking a License under the present System would if the Tax were reduced to Ten Shillings a Month cheerfully comply with the Law so that the License Fund instead of being diminished would be increased.

Your Petitioners would also remind your Excellency that a Petition is the only mode by which they can submit their wants to your Excellency's consideration as although they contribute more to the Exchequer that half the Revenue of the Colony they are the largest class of Her Majesty's Subjects in the Colony unrepresented.

And your Petitioners as in duty bound will ever pray etc.

Probably Signed in or around Ballarat

Probably Signed in or around Bendigo

Probably Signed in or Around Castlemaine

Probably Signed in or associated with The Ovens