Signature of David Jones from the 1853 Bendigo Goldfields Petition 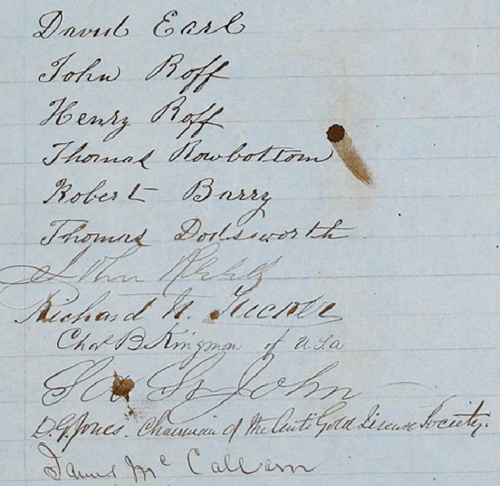 David Jones one of the leaders of the Bendigo Agitations.

Dr Jones was President of the Anti-Gold License Association, and signed the 1853 Bendigo Goldfields Petition. Agitation of the Victorian goldfields started with the Forest Creek Monster Meeting in 1851, but what became known as the Red Ribbon Movement was centred around the Bendigo goldfields in 1853. The Anti-Gold License Association was formed at Bendigo in June 1853, led by George Thomson, Dr D.G. Jones and 'Captain' Edward Browne. The association focused its attention on the 30 shillings monthly licence fee miners were required to pay to the government. They drew up a petition outlining digger grievances and calling for a reduced licence fee, improved law and order, the right to vote and the right to buy land. The petition was signed by diggers at Bendigo, Ballarat, Castlemaine, McIvor (Heathcote), Mount Alexander (Harcourt) and other diggings. The 13 metre long petition was presented to Lieutenant-Governor Charles La Trobe in Melbourne on the 01 August 1853, but their call for a reduction in monthly licence fees and land reform for diggers was rejected. The diggers dissatisfaction erupted into the Red Ribbon Rebellion where agitators wore red ribbons on their hats symbolising their defiance of the law and prohibitive licence fees.

We learn with deep regret that a very old resident of these colonies, who has done the State some service in his time, has passed away. The deceased gentlemen, Dr. D.G. Jones, of Deniliquin, may be reckoned amongst the pioneers of the great salt-bush country north of the Murray. He was a zealous and energetic worker in the public interests, and an able journalist, having for many years edited the Pastoral Times, of which he was the founder and proprietor, and which ranks amongst the best newspapers of New South Wales. He also established the Riverina Advertiser, published at Deniliquin, and the Deniliquin and Hay Standard, published at Hay, on the Murrumbidgee. The deceased gentleman had been suffering severely from dysentery, followed by fever and ague. Dr Jones arrived in Sydney about the year 849, and after a short resident in this colony, left for Victoria, attracted bu the gold-fever, during which period he took an active part in public matters connected with the management of the gold-fields. About the year 1856 Dr. Jones went to Riverina, and settled at Deniliquin, where he started the Pastoral Times newspaper, a journal which has carefully supported the pastoral interests, whole also advocating the development of the resources of the district. Dr. Jones took the initiatory steps for connecting Riverina district with Victoria by telegraph, and was one of the main supporters of the Deniliquin and Moama Railway, and undertaking first mooted by himself, and to the accomplishment of which he assiduously devoted himself, in the face of very serious obstacles thrown in the way by the Sydney Government. His death will leave a vacancy difficult to fill in the district of Riverina.[6]

If you can assist with information on this person, or a related image, please email eurekapedia@yahoo.com.au

To CITE this page click on the link to the left of this page.