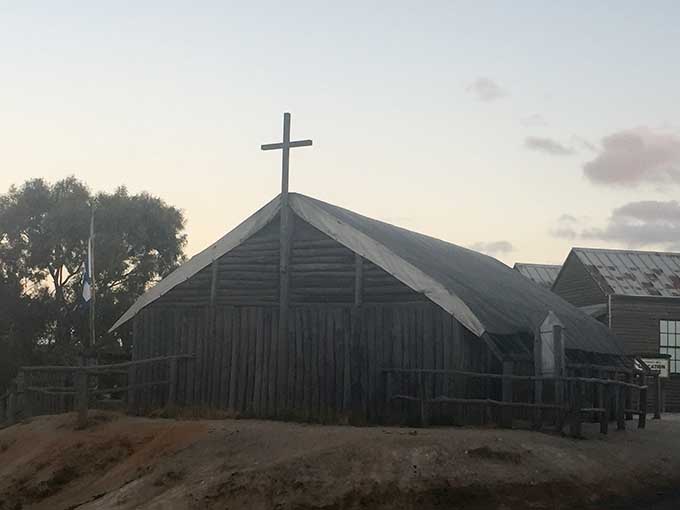 I saw the flag (at the gallery), and scrutinised it, and came to the conclusion that possibly it is the very identical flag displayed at the 'Slabaide' over forty years ago, and in my opinion it may not be. I expected to sees a little tint of red colour on the face; but through the lapse of time this colour might have disappeared. Neither is the blue colour very distinct, which was so in the original.I am even now sure nearly anyone might have concocted the banner, and, moreover,my impression is that the flag was more artistic. Anyhow, we might do worse than reject it; it will be something for posterity to worship.[4]

An old resident of Ballarat, Mr Stephen Cuming (sic), died at his residence, Pennyweight Flat, off Josephs Street, yesterday.Deceased, who was seventy-eight years of age, had resided in Ballarat for almost 50 years. It was in the tent of Mr Stephen Cuming that the late Peter Lalor obtained refuge after the memorable fight at the Eureka Stockade in December, 1854. In the early days Mr Cuming too a prominent part in various political movements, ever fighting in the Liberal ranks. He was also an ardent temperance advocate, and was a member of the rechabites for over thirty years. The funeral takes place tomorrow.[6]

A Veteran Figure Passes.
Who finds the track, who follows the track, Must measure him steel for steel, With the sword of flame 'gainst the road he came, And the fang'd head under bis heel, Who hears the song, who answers the song, Must fight for his faith afar, Where they tramp to the goal of the outlaw soul By the light of a vagrant star.
A veteran figure, a grand old fighter, dropped out of the rebel ranks the other week at Ballarat—dropped quietly out, and passed into the Beyond, even while at the street corners they still discussed his last gospel of divine discontent. Vale, Stephen Cumming 1 With him dies one more living memory of the Eureka Stockade, for though he was only a child when the outlawed Peter Lalor, with a shattered arm and a price upon his head, and the bloodhounds on his track, stumbled into his father's tent in the dusk of that disastrous day in the fifties, he remembered it all, and often described the days that followed— the hiding and the nursing of the sick fugitive till his fever had gone and his amputated arm healed. These were some of his earliest memories. Perhaps the sights and sounds, the human injustice, and the suffering of those dark days bit deep into his young soul, or maybe it was but the fighting blood of his Covenanterr forefathers that urged him, but certain it is that he fought the good fight for freedom with every - breath he drew—fought it stubbornly and consistently till the very hour of his going out. Sixty-seven years of age at the time of his death, Stephen Cumming was the eldest son of Stephen Cumming the elder, one of Peter Lalor's closest friends, and a constant associate of the Rationalist, Josh Symes. He claimed Irish descent, though Ireland was only one well-loved camping-ground in the wanderings of his ancestors. Covenanters, driven out of Scotland ior their faith, they found homes in the North of Ireland ; for many years before they followed the fortunes of mining, through Wales and into Cornwall, where, at Truro, in that county, Stephen Cumming was born, and at a very early age he was brought by his people to the Great Golden Continent in the early fifties. Of his personality, apart from his qualities as a democrat and a fighter for the New Dispensation, much of human interest might be said that is outside the scope of a short article. To make no notice of one or two phases of the man, however, would be unfair to the memory of a quite unique character. He was an enthusiastic musician, and wasone of the first members of the first Leidertafel established in Ballarat, being associated therein with the late Mr. John Robson. Possessed of a peculiarly beautiful bass voice and a fine gift of organisation, he was a recognised institution in his day whenever human need or the voice of charity called. Another, and widely different, side of him was a mechanical capability amounting to genius, and his joy in it. Those who knew him best, and were privileged to drop in on him casually, draw a charming little picture of the big man at play; seated in his workroom, bis fiddle tucked under his chin, his bow rasping: the strings like mad in a very diablerie of accompaniment to the wild measure cut out by a tiny engine and full head of stampers—a perfect minature battery, his pet creation, constructed with the aid of a kerosene tin, a knitting needle, a darning needle, and—brains. Another joy of his /was his beloved books, many of them the hoarded treasure (in days of a scantier literary supply) of his father, like whom he was a student of history, philosophy, science, etc., and was, in the truest sense of the word, a man of culture as well as gifts. By calling he was a battery manager (he studied chemistry at Ballarat School of Mines, and expert mining mechanic; in fact, he did most things well, and some things he did better than most. He is gone, and his country is the poorer!
MARIE E. J. PITT.[7]