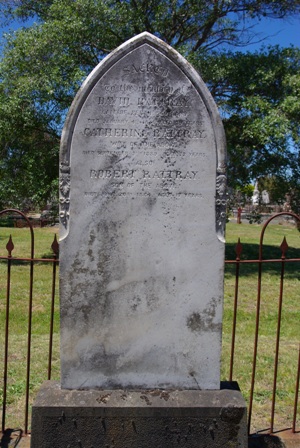 David Rattray was born at Kinsfauns, Perthshire, Scotland. With his wife Catherine he sailed to Australia on the Mangerton arriving on 5 June 1852. David was paid 2 pounds for acting as the seventh Police Constable aboard the vessel. They first settled at Ballarat.[1]

Rattray was married to Catherine Fenton at Kinnoul, Perthshire, Scotland on 26 Nov 1841 by the Reverend Edward Touch. David was born in 1842 and his brother Robert born in 1846. Robert died in 1864. David Rattray died on 4 January and was buried in the Ballaarat Old Cemetery AN 6 6 along with his wife, Catherine, and their son Robert.

Family memories place them looking at the Eureka Stockade battle through cracks from inside the Eureka Store owned by Catherine (Fenton) Rattray and David Rattray.

A miner who signed the Benden Sherritt Hassell Compensation Case Petition in 1855. [2]

RATTRAY.— The friends of Mr David Rattray are respectfully invited to follow the remains of his late dearly beloved wife to the place of interment, the Ballarat New Cemetery. The funeral cortege will move from his residence, Wattle Flat, This, Day (Tuesday, 1st December), at 1.30 o’clock precisely. CHARLES MORRIS, Undertaker and Embalmer, Grenville street (near Alfred Hall), 186 Sturt street (near City Fire Brigade), 3 and 5 Mair street. Telephone 270.