Isaac Johnson Hayward was born in Gloucestershire, England, in 1837, arriving in Australia in November 1852.[1] at the age of 15. He immediately joined the diggers in Ballarat. [2]

Hayward was a miner inside the Eureka Stockade when it was stormed on 3 December 1854. He returned to Ballarat for the celebrations of the 50th anniversary of the storming of the Eureka Stockade. At that time he was living at Morwell. The blue ribbon with gold lettering worn by him at the 1904 celebrations, and his Miner’s Right dated 6 February 1857 is at the University of Melbourne Archives.[4]

It is with feelings of deep regret that we have to chronicle the death of another old pioneer, and an esteemed resident of the district for many years, in the person of Mr Isaac Haywood, who passed away at his late residence, Morwell, on Saturday evening last, at the age of 68 years.
Deceased was born in Gloucestershire, England, in 1837, but left the old country when quite a lad, and in November, 1852, arrived in Victoria, being then only 15 years of age. The “gold rushes” were then at their height, and deceased immediately joined the army of gold seekers. Two years later he was present of the Eureka riot, Ballarat, and could relate much of interest in connection with same. He followed mining pursuits for many years and in doing so travelled practically all over Australia and New Zealand, experiencing the general ups and downs of the miner. Eventually he settled in Melbourne, where he married Miss Saunders, at Christ Church, Hawthorn. It was just twenty years ago since he and his family came to Gippsland and settled in Morwell, and during the whole of the time was most highly respected by all with whom he came in contact. He did a good deal of carpentering, and three and a half years ago he was engaged at the Eel Hole Creek hall, when a ladder fell with him, and he received an injury to the spine from which he never completely recovered. His condition, however, grew much worse during the last six months, especially when the weather was cold, and he was in a very helpless state for weeks past. As stated in our last issue, he was in a very critical condition on Thursday, last week, and he gradually sank till Saturday, when he passed peacefully away. He was conscious until a very short time before he died, and was well aware he was about to cross the great divide.
His remains were removed to Melbourne on Tuesday morning, and interred in the Kew Cemetery, close beside those of his father and mother, the Rev. H. Taylor officiating at the grave.
Deceased took a deep interest in Friendly Societies, and was a member of the M.U.I.O.O.F. for fifty years. As a mark of respect the members of local Lodge, of which deceased was an honorary member, carried the coffin to the station, and marched from his late residence.
We are informed that among those present at the grave were the following officers of M.U.I.O.O.F.: P.C.S. Dalley, P.P.G.M. W. Burton, P.P.G.M. W. Bruton, P.P. G.M, W.H. Slattery, D.P.G.M. H. J. Collings. P.G. J.B. Mailing, P.G. W. Sumner, and N.G. J. Saunder. An Oddfellows service was conducted in a very impressive manner by P.C.S. Dalley.
Deceased leaves widow and two sons (William and Fred) to mourn his loss, and also three brothers and one sisiter (Mrs Mellor). Much sympathy has been expressed with the bereaved ones.[5] 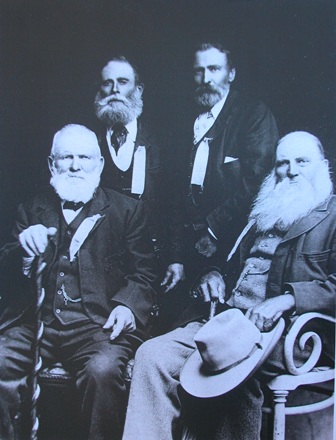 Four Jolly Diggers - The Eureka Celebrations.
Four jolly old gentlemen were introduced to the representative of the "Echo" on Friday last by the secretary of the Eureka celebrations committee Mr Troup. They each wore the Eureka badge pinned on the lapel of the coat.
"These gentlemen have come from Morwell," said Mr Troup,"to take part in the celebrations. Allow me to introduce you to Mr Isaac Hayward. Mr David Maine. Mr John Kemp. Mr George Firmin.
Bows all round, and then there was a general conversation with so many "I remembers" in it that it was evident that memories of the past were falling thick and fast upon these four hale old pioneers, the eldest of whom is a ripe age of 80 years, and the youngest a comparative youth of 67 or so. Mr Kemp, the eldest is remarkable for his youthful appearance and cheerful demeanour.
In the roaring days of the goldfield each member of the interesting quartet followed the occupation of a digger, experiencing all the ups and downs which inevitably form part of that alluring calling. None of them made any sensational discovery, but what is more to the point, three were actual witnesses of the burning of Bentley' Hotel and all of them approve of the stand which the diggers in the stockade took against a tyrannical system of administration. There is reason to believe that Mr Kemp's box of matches helped to set Bentley's Hotel in the blaze which consumed it to ashes. There was a great surging crowd around the hotel and one of Mr Kemp's mates came alongside him and said, "Give us your matches, Jack," and not knowing at that time that they were used for the purposes of arson, Mr Kemp handed over his tin box of wax vestas, and saw them no more. Mr Hayward and Mr Maine were present at the conflagration, and the latter caught Bentley's cat as it leaped out of the flames, and, later, took it home with him to his camp as a souvenir of the tremendous occasion.

Mr Hayward had a claim near the Gravel Pits, and he saw the military stoned as they were entering the camp from the Melbourne road, a few days before the encounter. "That was an ill advised action," remarked Mr Kemp, and "It was, indeed," commented his three companions. There was no attempt at justification for that stupid attack on a body of men under strict orders not to act upon the offensive. "But," added Mr Hayward, "the diggers had a right to be excited and ndignant at the way they were treated. We had been worried out of our lives by the troopers compelling us to show our licences, and treating us like a lot of ticket-of-leave men. Beside we had many see the unfairness of paying a licence to dig in a small piece of ground when the squatters hold thousands of acres for a few pounds a year. We are the men who were making the country, and we were treated as if we were undesirable immigrants. No wonder the blood of the wilder spirits boiled under such conditions. Mr Firmin tells a sensational story of the brutality of one of the Commissioners. It appears that while the disturbances were in progress a miner named James Ralph was in trouble with the authorities. His wife went down to the camp one evening to get tidings of her husband, when one of the Commissioners came out of his tent and held a revolver at her head. "You coward." Exclaimed the woman, "that's all you're good for is to frighten women and children; you're afraid to tackle a man like my husband." The Commissioner was in a boiling rage, but he threw away his revolver, and it eventually passed into the possession of Mr Ralph it was found to be loaded in three chambers. Mr Firmin is now endeavouring to trace Ralph, and if possible, the revolver will be obtained for the Ballarat Historical Record society.
Mr Hayward had something very interesting to say about Sir Charles Hotham, and if what he was told was true the Governor's reputation is thereby cleared of the imputation that he was at last antagonistic to the diggers. When at the Custom House some years ago Mr Hayward was assured that a letter from Sir Charles Hotham to the Executive is extant, and which, in effect states that the diggers' complaints were on the whole justified, and that a conference should be held to enquire into the causes of their grievances. Mr Hayward believes that the Governor's good intentions were frustrated by the Attorney-General (Sir William Stawell. Afterwards Chief Justice) who, it appears, had no sympathy with the digging population.
Many exciting scenes were witnessed by the four pioneers we have been referring to, and they will, no doubt, prove to be valuable additions to the collection of Eureka veterans Mr Troup is gathering together for the demonstration.
Mr Maine is one of the survivors of the wreck of the London in the Bay of Biscay on January 11, 1866.[6]