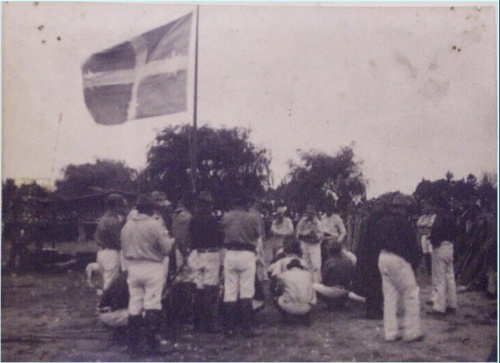 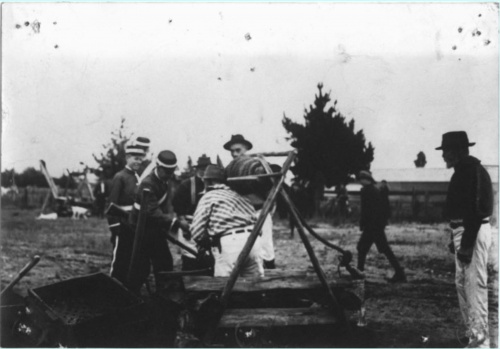 John Algie was born on 9 Dec 1834 Inchinnan, Renfrewshire, Scotland. Arrived in Melbourne, Australia, 2nd August 1853 on the Albion, with his brother Robert Algie.

He married Elizabeth Wilkins on 10th April 1858 in Ballarat.

In the early days of Ballarat John Algie was a member of the mounted police, and was in the body of police who were despatched from Melbourne to assist in quelling the Eureka Riots.

He was employed for many years in the Union Foundry.

ALGIE – On the 11th September, at his residence, Junction street, Ballarat, John Stewart Algie, of disease of the brain; aged fifty six years. At rest. [1]

The many friends of Mr John Algie, for many years employed in the Union Foundry, will regret to hear of his death. Deceased was an old identity, and in the early days of Ballarat was a member of the mounted police. In the latter capacity he formed on of a body of police who were despatched from Melbourne to assist in quelling the Eureka riots. Mr Algie was well known and highly respected, leaves a wife and nine children to mourn his loss.[2]

MEMBERS of the IRONWORKERS’ ASSISTANTS’ UNION are requested to follow the remains of our respected brother, JOHN S. ALGIE, to the Ballarat Old Cemetery. The funeral cortege will leave his late residence, tomorrow (Sunday) afternoon, at a quarter to four. JNO. SHELDON. Secretary.

EXCELSIOR LODGE, G.U.O.O.F -The members of the lodge and order are invited to meet at Junction street on Sunday, at half past three, for the purpose of attending the funeral of late Br JOHN ALGIE, P.D.M. JOSEPH POUNDER, Secretary

OBITUARY Ballarat Courier. 14th September 1891. Page 4. The funeral of the late Mr John Algie took place yesterday afternoon, and was largely attended; the procession being headed by about 300 scholars and teachers of the Pleasant Street Wesleyan Sunday School, members of the Ironworkers’ Assistants’ Association, followed by members of the Excelsior Lodge, G.U.O.O.F., numbering in all about 400 mourners. The remains were interred in the Ballarat Old Cemetery; the Rev J. Cowperthwaite officiating at the residence of the deceased and also at the grave. Br S. Gay conducted the services of the Excelsior Lodge. Out of respect to the deceased, the pulpit at the Pleasant Street Wesleyan Church was yesterday draped in black, and at the morning service touching reference was made to the death by the Rev J. Cowperthwaite, while the choir rendered the anthem, “Consolation”. At the evening service, conducted by Mr Moyle, the choir sang “But Thine be the Glory.” Miss V. Spear at each service played the Dead March in “Saul” very effectively.