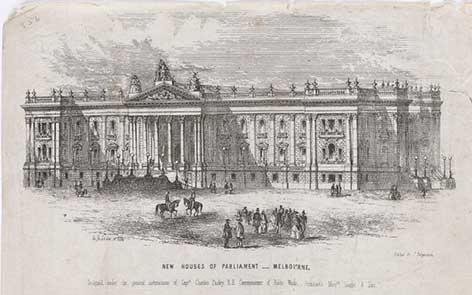 The region now known as Victoria was part of New South Wales until formal separation in 1851. The Act that established this separation also provided for a limited form of representative, self-government in the new colony. This occurred through the establishment of a Legislative Council (but not a Legislative Assembly) consisting of thirty Members, with twenty elected (only significant property owners being eligible to vote) and the remainder appointed by the Lieutenant-Governor (who was, in turn, a British appointee). Victoria 's Legislative Council first met in November 1851 at St Patrick's Hall, Melbourne. The first Legislative Council of Victoria served the colony for five years making at least three significant and lasting contributions to Victoria's parliamentary system within that time, namely

Victoria 's Constitution was approved by the Legislative Council in March 1854 but was not officially proclaimed until 23 November 1855 after receiving Royal Assent in Britain. The Constitution introduced a Westminster-style system of responsible government that has remained in place ever since. Some of the main features of the system include:

The Victorian Parliament's first elections were conducted during the Spring of 1856 with the legislature's first meeting on 25 November 1856. The new Legislative Council consisted of thirty Members representing six Provinces (each Province having five Members). From its first sitting, the Council adopted many of the rules and procedures of the British Parliament (with local variations shaped by past experience in Victoria 's first Legislative Council and New South Wales ' legislature) such as those governing debate and the passage of legislation.[3]

A significant influence on the Legislative Council's composition and behaviour up to the middle of the twentieth century was its membership and voter qualifications, although their influence was greatest during the nineteenth century. These qualifications: