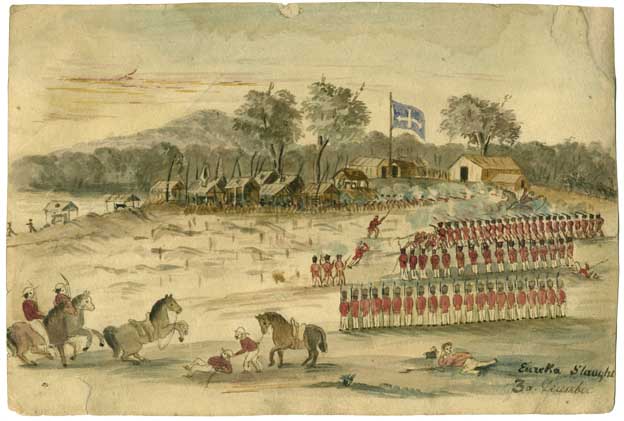 Robert Adair was in the military.

Adair was a private of the 12th Regiment. (Reg No 3329) who was severely wounded when shot through the hand during the Eureka uprising. He was later stationed in New Zealand. [1]

THE AFFAIR AT BALLARAT.
By the courtesy of Colonel Macarthur, Deputy Adjutant-General, we have been favoured with the following official account of the rencontre of the military with the diggers at Ballaarat, on the 3rd instant :
General Order.- No. 163. Head Quarters, Camp, Ballaarat, December 9, 1854.
The Major-General has had under consideration the report of Captain Thomas, 40th Regiment, respecting a sharp rencontre which took place at dawn, on the 3rd instant, about one mile and half from this Camp, between a body of insurgents and part of the troops then at Ballaarat.
The party in this affair was composed of one subaltern, and 65 of other ranks of a detachment of the 12th Regiment, under Captain Queade ; one subaltern, and 30 of other ranks of the military mounted force, under Lieutenant Hall, 40th Regiment; and one subaltern, and 87 of other ranks of a detachment 40th Regiment, under Captain Wise; together with six officers and 94 mounted and foot constabulary. Captain Pasley, the Royal Engineers. Lieutenant Richards, 40th Regiment, and Sub-lnspector Taylor, were Captain Thomas's orderly officers on this occasion.
The force thus constituted, advanced steadily until they received the fire of the rebels, and then stormed an extensive barricade which these had for same days constructed, and held as a strong-hold.
In their headlong flight before the vigorous assault of the troops, they met with severe and merited chastisement. Thirty are believed to have been killed, and a much larger number wounded.
This salutary lesson to the traitors and anarchists, then banded together for the subversion of law and order has, the Major-General regrets to learn, not been effected without Captain Wise, 40th Regiment, Lieutenant Paull, 12th Regiment, being severely wounded, and the casualties contained in the subjoined list.
Sir Robert Nickle will not fail to submit the names of the killed and wounded for the consideration of the Right Honourable the General commanding in chief, in order to their being transmitted to their respective parishes, so that friend and kinsmen may become acquainted with their gallantry.
While here with the troops, the remembrance of these brave men will be kept alive in the sections of which they form a part. Like them, whether in splendid triumphs or in minor affairs, it is the good opinion of the officers, non commissioned officers, and pivaies to which he belongs, that every true soldier should ,seek to obtain. The Major-General considers that Captain Thomas deserved the utmost praise for the secrecy which he maintained while planning this energetic attack, as well as for the promptitude with which it was accomplished when planned.
On an occasion when all are reported to have behaved well, both soldiery and police, it would be invidious to made distinctions ; but this much may be affirmed, that, while the troops dealt heavy blows on the insurgents, they were not unmindful of the protection of their wounded officers on the field.
List of casualties incurred by the force under the command of Captain J. W. Thomas, 40th Regiment, in the attack on the rebel, camp at Eureka, on the 3rd December, 1854 : -
12th Regiment.
Lieutenant W. H. Paull, severely wounded.
Private William Webb, mortally ditto, since dead.
Private Robert Adair, severely wounded.
Private John Smith, severely ditto.
Private Felix Boyle, severely ditto.
Private William Buttwill, very severely ditto.
Private Timothy Galvin, severely ditto.
Private William French, severely ditto.
40th Regiment.
Private Michael Rooney, killed.
Captain H. C. Wise, dangerously wounded.
Private John Bryan, severely ditto
Private Henry Cottes, slightly wounded.
Private William Juniper, severely ditto.
Private Bernard O'Donnell, severely ditto,
Private Joseph Wall, mortally, since dead.
Private Patrick Sullivan, slightly wounded.
By command,
(Signed)
E. MACARTHUR, D.A.G.[2]