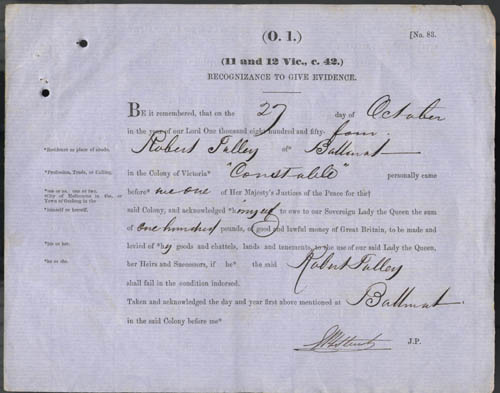 "Official form on blue paper - evidence - Robert Tulley, constable, 27 October 1854, p.1, PROV, VPRS5527/P0 Unit 1, Item 90
Be it remembered, that on 27th day of October in the year of our Lord One thousand eight hundred and fifty four from Robert Tulley of Ballarat in the Colony of Victoria Constable personally came before me one of Her Majesty's Justices of the Peace for the said Colony, and acknowledged himself to owe to our Sovereign Lady the Queen the sum of one hundred pounds, of good lawful money of Great Britain, to be made and levied of the goods and chattels, lands and tenements, in the use of our said Lady the Queen, her Heirs and Successors, if the said Robert Tulley shall fail in the condition indorsed.
Taken and acknowledged the day and year of your first above mentioned at Ballarat in the said Colony before me
E.P.S.Sturt JP 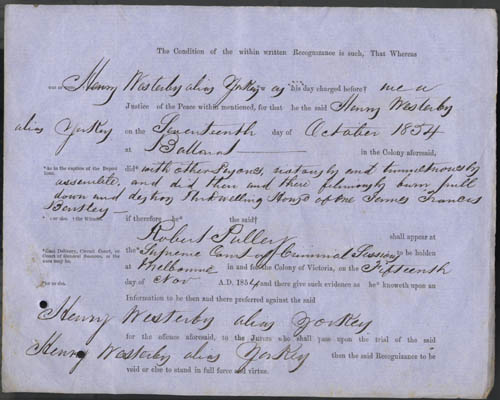 "Official form on blue paper - evidence - Robert Tulley, constable, 27 October 1854, p.2, PROV, VPRS5527/P0 Unit 1, Item 90
The condition of the within written Recognizance is such, That Whereas Henry Westerby alias Yorky this day charged before me a Justice of the Peace within mentioned, for that he the said Henry Westerby alias Yorkie was the Seventeenth day of October 1854 at Ballarat in the Colony aforesaid, did with other persons riotously and tumultuously assemble, and did then and there, feloniously burn, pull down and destroy the dwelling of one James Francis Bentley it therefore be the said Robert Tulley, Constable shall appear at the Supreme Court of Criminal Sessions to be holden at Melbourne in and for the Colony of Victoria, on the fifteenth day of November A.D., 1854, and there give such evidence as he knoweth upon an information to be then and there preferred against the said Henry Westerby alias Yorkey for the offence aforesaid, as the Jurors who shall pass upon the trial of the said Henry Westerby alias Yorkey then the said Recognizance to be void or else stand in full force and virtue. 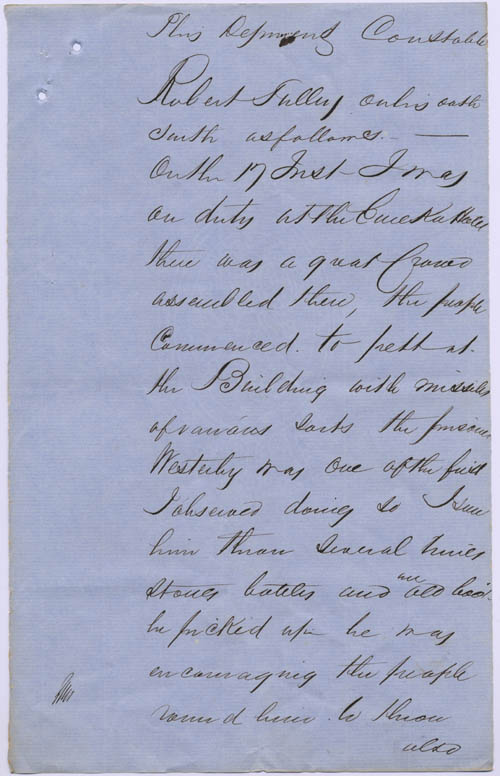 This Deponent Constable Robert Pulley on his oath saith as follows-
On this 17th Inst I was on duty at the Eureka Hotel there was a great Crowd assembled there, the people commenced to pelt at the Building with missiles of various sorts the Prisoner Westerby was one of the first I observed doing so I saw him throw several times stone bottles and old boots (?) he picked up he was encouraging the people round him to throw also 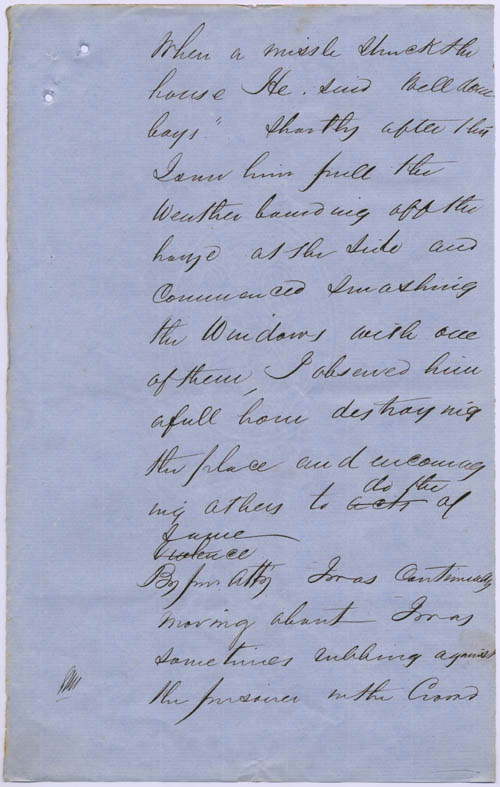 When a missile struck the house He said Well done boys’’
Shortly after this I saw him pull the weather boarding off the house at the side and commenced smashing the windows with one of them, I observed him a full hour destroying the place and encouraging others to do the same.
By prisoners Attorney I was continuously moving about I was sometimes rubbing against the prisoner in the Crowd 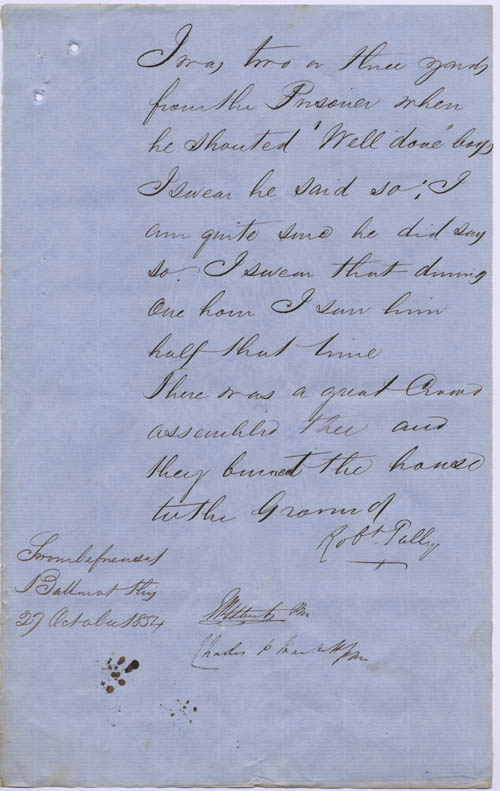 I was two or three yards from the Prisoner when he shouted “Well done” boys I swear he said so: I am quite sure he did say so. I swear that during one hour I saw him half that time.
There was a great crowd assembled there and they burned the house to the Ground.
Robert Pulley
Sworn before us at Ballarat this 27th October 1854

Robert Tulley was a constable of Police at Ballarat in 1854.