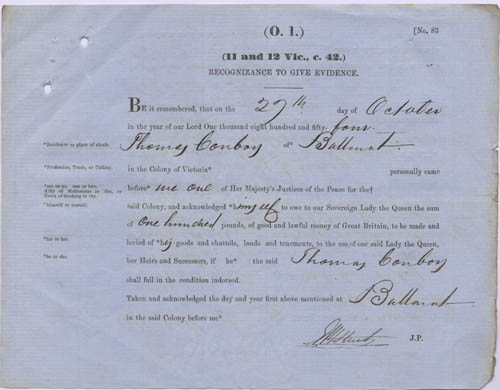 "Official form on blue paper - evidence - Thomas Conboy, 27 October 1854, PROV, VPRS5527/P0 Unit 1, Item 70 Recognizance to give evidence.
Be it remembered, that on 27th day of October in the year of our Lord One thousand eight hundred and fifty four Thomas Conboy of Ballarat in the Colony of Victoria Trooper personally came before me one of Her Majesty's Justices of the Peace for the said Colony, and acknowledged himself to owe to our Sovereign Lady the Queen the sum of one hundred pounds, of good lawful money of Great Britain, to be made and levied of the goods and chattels, lands and tenements, in the use of our said Lady the Queen, her Heirs and Successors, if the said Thomas Conboy shall fail in the condition indorsed.
Taken and acknowledged the day and year of your first above mentioned at Ballarat in the said Colony before me
EPS Sturt JP 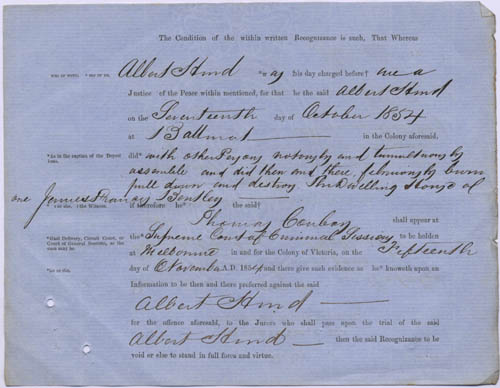 "Official form on blue paper - evidence - Thomas Conboy, 17 October 1854, 27 October 1854,PROV, VPRS5527/P0 Unit 1, Item 70
The Condition of the within written Recognizance is such, That Whereas Albert Hurd was this day charged before me a Justice of the Peace within mentioned, for that he be the said Albert Hurd on the Seventeenth day of October 1854 at Ballarat did with other Persons riotously and tumultuously assembled and did then and there feloniously burn, pull down, the Dwelling House of one James Francis Bentley it therefore to the said Thomas Conboy shall agree at the Supreme Court of Criminal Sessions to be holden at Melbourne in and for the Colony of Victoria, on the Fifteenth day of the November A.D., 1854, and there give such evidence as be knoweth upon an Information to be true and there proffered against the said Albert Hurd for the offence aforesaid, to the Jurors who shall pass upon the trial of the said Albert Hurd then the said Recognizance to be void or else to stand in full force and virtue. 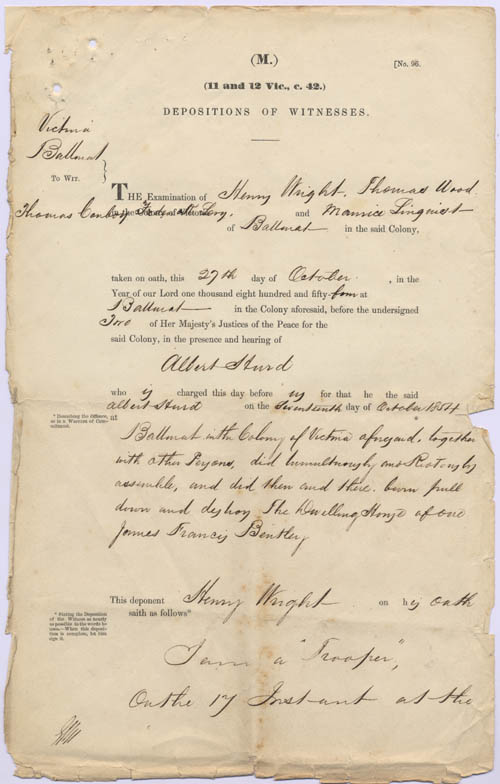 "Deposition of Witnesses - Henry Wright, Thomas Wood, Thomas Conboy, Frederick Levy and Maurice Linquist re Bentley Hotel, 27 October 1854, PROV, VPRS5527/P0 Unit 1, Item 70 Depositions of Witnesses
The examination of Henry Wright, Thomas Wood, Thomas Conboy, Frederick Levy and Maurice Linquist of Ballarat in the said Colony, taken on oath, this 27th day of October, in the Year of our Lord one thousand eight hundred and fifty-four at Ballarat in the Colony aforesaid, before the undersigned Two of Her Majesty's Justices of the Peace for the said Colony, in the presence and hearing of Albert Hurd who is charged this day before us for that he the said Albert Hurd on the twentieth day of October 1854 at Ballarat in the Colony of Victoria aforesaid, together with other Persons, did tumultuously and Riotously assemble, and did then and there burn pull down and destroy the Dwelling House of one James Francis Bentley.
This deponent Henry Wright on his oath saith as follows I am a "trooper," on the 17 Instant at the 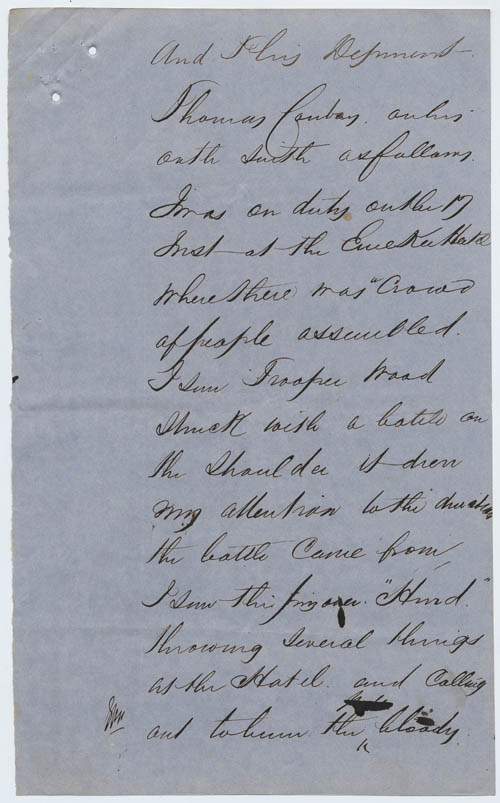 "Deposition Thomas Conboy, p.1, PROV, VPRS5527/P0 Unit 1, Item 70
And this Defendant Thomas Conboy, on his oath saith as follows.
I was on duty on the 17 inst at the Eureka Hotel where there was a crowd of people assembled. I saw Trooper Wood struck with a bottle on the shoulder. It drew my attention to the direction the bottle came from. I saw the prisoner "Hurd" throwing several things at the Hotel and calling out to burn the bloody 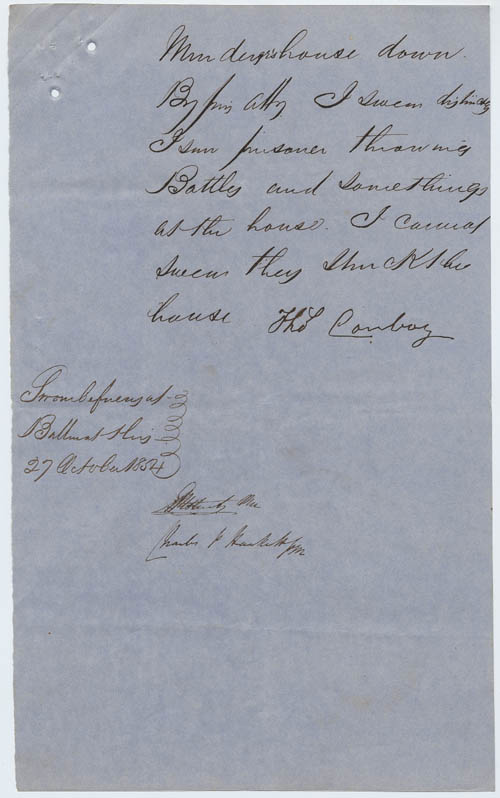 It will be remembered that some weeks ago Mr. Longmore, in his place in the Assembly, indirectly charged Mr. Akehurst, P.M., with having wantonly caused the death of a man named Powell during the Ballarat riots in 1854. The allegation was contradicted by the Attorney-General in the House, and subsequently a declaration made by a man named A. W. White appeared in our columns, going to prove that the man could not have met his death at the hand of Mr. Akehurst. As corroborative of his statements we append the following declaration, made by Thos. Conboy, who was also present, and took part with the troops in suppressing the disturbance: — "I, Thos. Conboy, Victoria, laborer, do solomny and sincerely declare that in the year 1854 I was in the mounted police force situated at Ballarat. I was present at the Ballarat riots on the 3rd December, 1854, and was on duty at the Eureka Stockade on that day. Amongst others on duty in the mounted police force on that day were A. Warren White, Henry Wright, and Ed. Preece. I did not know a man named Lenese, but he might have been there. I saw the abovenamed parties, with Mr. Akehurst and others of the force, go round to the right of the stockade. I did not accompany them, being ordered to join the reserve. Mr. Akehurst wore no sword that day, nor did I over see him wear one. A day or two afterwards I heard some of the troop charging Ed. Preece and others with attack ing an unarmed man. Preece said, ' How did I know but he was armed and might shoot me.' I did not attend the inquest on Powell, the man killed at the riot, as I was ordered away for despatch duty that day. I heard that there was plenty of evidence to clear Mr. Akehurst. I and White and Preece left the force after the riots and returned to the diggings at Ballarat, and there I heard that Preece was charged with being concerned in the death of Powell. Preece soon afterwards left the diggings, and I have never heard of him since. I have seen the letter signed .'A. Warren White,' inserted in The Age of 27th June last, and he must be mistaken stating that Preece was an old soldier from India. I know Preece well, and he had never been in the army, and at the time of the riots was a young man of about twenty-five years, with fair complexion and hair, and not unlike Mr. Akehurst in figure."[1]

In 1874 Thomas Conboy was described as an ex-constable living at Seymour, Victoria..[2]

He was selling land at Bungaree in 1876.

ORMOND.. — MONDAY, 20th MARCH, At Two o'clock p m. 7O Acres of Prime Bungaree LAND Equal to any in the Colony ; Known as the Property of THOMAS CONBOY. EVERINGHAM, GREEN FIELD, and CO. have been instructed by Mr Thos. Conroy, to sell by auction, on the ground, situate near Henneberry'e Hotel, Ormond, on Monday, the 20th day of March, 1876, at Two o'clock p.m., 70 Acres of Extremely Fertile LAND, being the northern portion of section 39, parish of Bungaree, having a frontage of 20 chains to the State Forest macadamised road. The land is substantially fenced and permanently watered. Liberal Terms Given.[3]

The following insolvency may be linked, but is not verified as the same person.