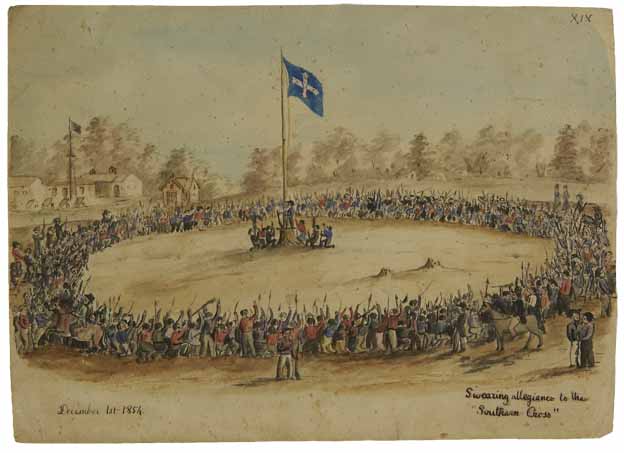 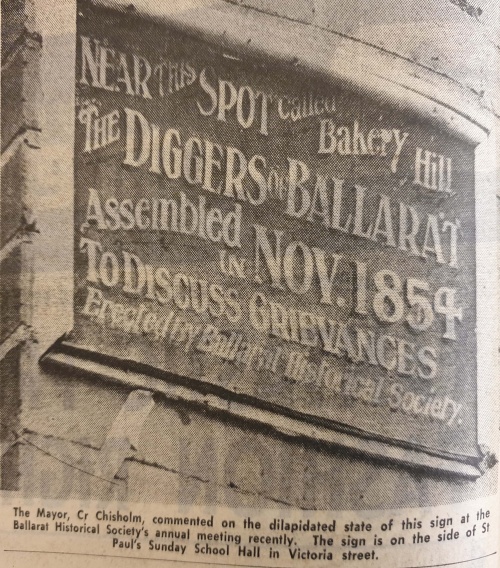 Bakery Hill was the hub of the Ballarat goldfields where all roads met in the narrow gully. Hotels, merchants and goldbuyers centred on Bakery Hill[1] to harness passing trade.

A temporary platform had been erected in prepartion for the Bakery Hill meeting of 11 November 1854. J.B. Humffray was in the Chair, and the proceedings were opened by Dr Carr. Thomas Kennedy addresses the crowd starting with "Brother diggers!". He advised unity and to obey the law, but denies the legality of the licence tax. He decalires he would die for the Queen, but would shed the last drop of his blood before paying another licence fee. The Ballarat Reform League is is officially launched at this meeting with J.B. Humffray as the President, Timothy Hayes as Chairman and George Black as Secretary.

On 29 November 1854 a ‘Monster Meeting’ was held on Bakery Hill against the gold licence which was seen as an unjust tax. A flag, representing the Southern Cross, with white stars on a dark blue background, was said to be flown on an eighty foot pole. The diggers took the ‘Oath of the Southern Cross’. They knelt, and with heads uncovered pointed to the banner and said,

We swear by the Southern Cross to stand truly by each other and defend our rights and liberties.

HISTORIC TREE STUMP
Where Eureka Stockaders Discussed Grievances
BALLARAT, Tuesday. — Mr R. S. Reed, of Barkly Street, claims that an old tree stump on the south side of Victoria Street, near Humffray Street, is the historic tree at which the pioneer diggers gathered in the days before the Eureka Stockade, to discuss their grievances against the officialdom of the time. The locality was better known as Bakery Hill, which was also famous for yielding the great Welcome Nugget. It was there that the incensed diggers burnt their licences to show their con tempt for the administration of the law. Mr Reed suggests that a committee of citizens be formed to take steps to beautify the spot, and to preserve the tree stump.[2]

The stump of the old tree at Bakery Hill, near Ballarat (Viv.), which was the rendezvous of the goldminers in the troublous times of 1854, has been securely fenced in, and the enclosed area is to be planted with floriferous trees. The spot is adjacent to Eureka, which is famed alike for the stockade fight and for the fact that the Welcome Nugget. (sold for £10,500) was discovered in 1858 within a stone's throw of it.[3]

During the whole of the morning several men were busily employed in erecting a stage and planting the flagstaff. This is a splendid pole of about 80 feet and straight as an arrow. This work being completed about 11 o’clock, the Southern Cross was hoisted, and its maiden appearance was a fascinating object to behold. There is no flag in Europe, or in the civilised world, half so beautiful and Bakery Hill as being the first place where the Australian ensign was first hoisted, will be recorded in the deathless and indelible pages of history. The flag is silk, blue ground with a large silver cross; no device or arms, but all exceedingly chaste and natural.[4] 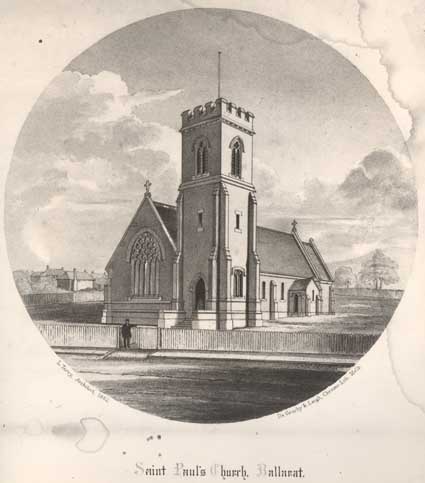 A very old colonist Mr. John Balderston, died on Tuesday. Born at Kirkaldy, Fifeshire, in 1831, he engaged in 1851 as a station hand with Philip Russell, of Carngham, but hearing at the Cape of the discovery of gold at Port Phillip, he and his companions started for the goldfields on their arrival in Hobson's Bay.
He built the first bakery in Ballarat, near the present St. Paul's Church, since known as Bakery Hill. Some years ago he purchased a property at Glenalvie, near Loch, where he died at the age of 77 years.[5]

Where did the Bakery Hill monster meetings take place? 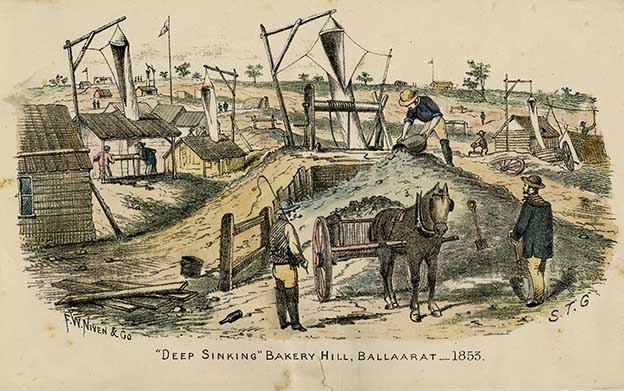