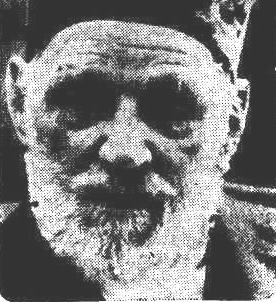 Barnard Welch was born in London, England, in 1843 sailed to Melbourne in 1852 on the sailing ship Chalmers with his parents, five brothers and two sisters.[2]

NINETY YEARS OLD
Mr. Barnard Welch's Memories - EUREKA STOCKADE TRAGEDY - A man who was present at the tragic episode of the Eureka Stockade, Ballarat, in 1854, and who clearly recalls the news of the fall of Sebastopol in the following year, celebrated his 90th birthday today. He is Mr. Barnard Welch, of'Railway-road, West Subiaco.
Mr. Welch lives in a little old-fashioned weatherboard cottage opposite the West Subiaco railway station; He has resided there for the last 25 years. His wife died just three years ago at the age of 83 years, and the veteran is well looked after by his daughter, Miss Harriet Welch. A happy gathering of more than 50 relatives and friends celebrated the attainment of his 90th milestone yesterday, and when an interviewer called on him today Mr. Welch drew attention to a pile of gifts and the remaining section of a large birthday cake made by two of his daughters. Yesterday it was decorated with 90 miniature candles.
CAME OUT IN '52
Born in London in 1843. Mr. Welch came out to Melbourne in 1852 in the sailing ship Chalmers with his parents, their five other boys and their two girls. The only other survivor of the family today is Mrs. Medcraft, who lives with her daughter, Mrs. Giles, in Proclamation-street, Subiaco. 'We stopped for a time at 'Canvas-town,' Port Phillip, now Collingwood recalled the nonagenarian, 'and then went to Ballarat East, where my father joined, in the Little Bendigo gold rush, enjoying good luck. Later we moved to the Eureka field. My father supplied the claims with timber and other things, and I used to wash the 'dirt' in a tub to help to guide the diggers in their search, getting whatever gold I found as my pay. 'One day in October, 1854, a Scotch man named Scobie, who had just arrived, went with his cousin, Archibald Carmichael, to Bentley's Hotel for some whisky. A little later they went back for more, but found the hotel closed. The men broke a window and while returning home were overtaken by Bentley's people as they were passing our tent door. One of the hotel men picked up my spade and hit Scobie on the head with it, killing him.
£8 DAY AS WITNESS!
"At the inquest Bentley and two other men were committed for trial, and I went to 'Melbourne as a witness. I was then aged 12. Bentley got two years jail but the others were let off. 'I was allowed £8 a day expenses in Melbourne, because, it was found that the tub of dirt I was washing when I left my job contained two ounces of gold. This was taken as a day's work and I was allowed £4 an ounce!
THE STOCKADE
Recalling the historic Eureka Stockade, episode in December, 1854, Mr. Welch described the digging of trenches and the building of the stockade by the men in consequence of the imposition of licence fees on the diggers and the drastic action taken by the police when payment was refused. "One morning,' he said, 'soldiers of a British regiment, who had marched from Geelong to Ballarat, were passing the stockade, when somebody threw a stone, which hit a young drummer on the head and killed him. The drummer was a favorite with the soldiers, and his fate infuriated them. They turned round and charged the diggers in the trenches. After some resistance the men surrendered, but while being marched along by the soldiers they broke away. 'I was with my father nearby at the time, and a man who was talking to my father and who had had , nothing to do with the affair, ran towards his tent to take cover. A trooper called to him to stop, but he didn't and the trooper shot him dead.
My father called out to the trooper, 'that was a cowardly action,' and the trooper replied, 'I'll put you down, too, in a minute!' I remember these words very clearly. Fortunatetly my father kept cool. 'A little later the troopers showed their spite by setting fire to the diggers' tents over a big area.' Mr. Welch was engaged in the butchering trade in Ballarat West for more than 40 years. He came to Western Australia in 1895 and was a butcher in Coolgardie for 11 years. Later he conducted a carrying business before coming to Subiaco.
BLIND FOR SEVEN YEARS
For seven years Mr. Welch has been totally blind. His hearing is very good, and his memory evidently keen. 'I am neither a teetotaller nor a non-smoker!he confessed. The veteran has a son and three daughters living, one of the daughters being Mrs. Shortlaud Jones, who is well known for her charitable activities. An other son, Major L. B. Welch, formerly of the 28th Battalion, was killed in the Great War.[3]