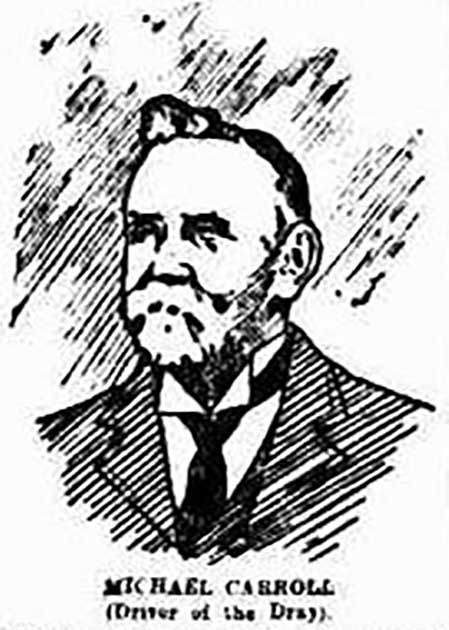 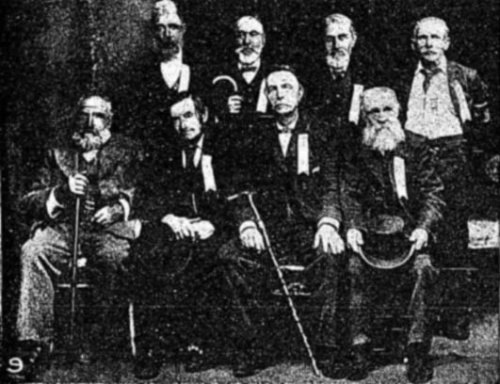 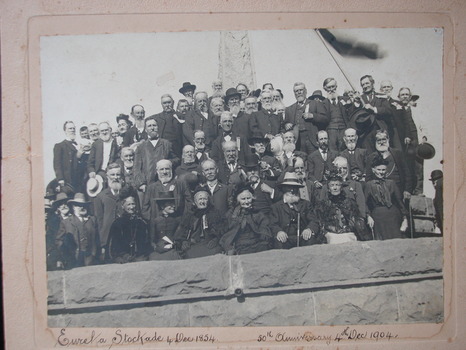 Michael Carroll was born 17 April 1842 in Geelong, Victoria. Michael Carroll was baptised in Geelong prior to building St Mary's Church, by a visiting priest. The baptisimal details are in the register of Baptisms at St Francis, Melbourne. Michael’s parents where Margaret and Patrick who arrived at Ballarat in 1851, during the first rush to Ballarat. Patrick had some success mining, and bought a waggon and a team of horses, and commenced business as a carrier between Geelong and Ballarat.

Mary Ann Simper married Michael Carroll. He spent his last years in the Ballarat Benevolent Asylum.[1] He died on 29 June 1924,aged 82, and was buried in the Ballaarat New Cemetery.[2]

Born in Geelong on 17 April 1842 I have now plassed my long journey having passed the 81st milestone in my long journey through life and as I can't expect to reach many more mileposts I now make this solemn statement and it may not be long befoe I will have to make my maker to give an account of doings in this would and I now say it was my father Patrick Carroll who took all the risk in Lalors escape I his son was the one who drove the dray In which he rode and after three days and nights we arrived safely in Geelong.
Signed
Michael Carroll [3] 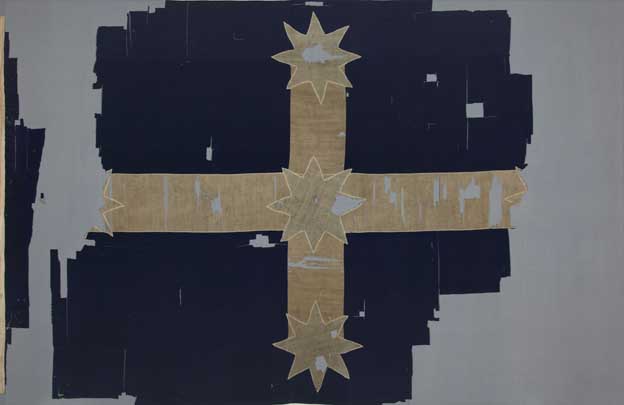 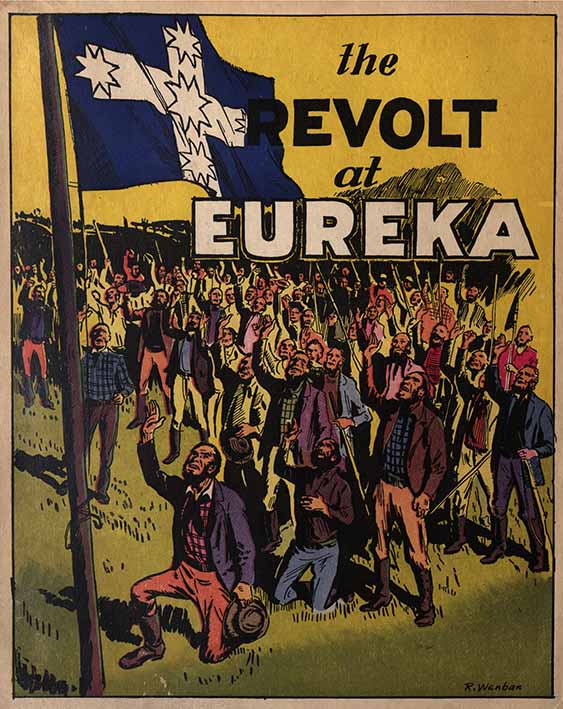 EUREKA MEMORIES – RECALLED BY VETERANS DEATH
There passed away at the Ballarat Benevolent Home yesterday morning, Mr Michael Carroll, whose name is directly connected with the early Eureka Day at Ballarat. Mr Carroll, who celebrated his 82nd birthday on 17th April last, was one in whom visitors enjoyed many pleasant hours listening to the happenings of the Eureka days. He was possessed of a splendid memory, and as late as yesterday week conversed freely with friends concerning his early youthful experiences. It was only during the early part of last week that Mr Carroll’s health cause any concern, and he passed away at 9 o’clock yesterday. The deceased was one who was highly respected by the Benevolent Home officials and also by the many constant visitors, all of whom expressed their sorrow at the old pioneers passing. Deceased was one of Ballarat’s Pioneers, and his names is well associated with Eureka days, as he accompanied his father, who drove the dray that took Peter Lalor to Geelong after the Eureka Stockade fight. He remembered well the great meeting on Bakery Hill a fortnight before the riot to demand the release of the four miners who had been imprisoned for having burnt Bentley’s Hotel. Peter Lalor was at this meeting appointed commander in chief, and all diggers took the oath, “We swear to stand true to each other in demanding the release of the four miners imprisoned for the burning of Bentley’s Hotel.” The excitement was very great. One miner, Humffray by name, did not want to take part in the riot and was met with the rejoinder from the person named McIntyre “Moral persuasion is all humbug: nothing can convince like a lick on the lug”. The Southern Cross flag was hoisted on the Hill, and a great cheering followed. At this period Mr Carroll was then a boy aged 13. After the meeting Mr Carroll went back with his father in a dray to Brown Hill, and stayed with a man named Michael Hayes, whose son is still alive in Ballarat. Mr Hayes kept a store with Carr, and Mr Carroll’s father did his carting from Geelong. It was here after Eureka that Lalor was taken, and this information was secretly given to Carroll and his father. On their next trip to Geelong they were entrusted with a letter to Miss Dunn concerning the future movements of Lalor, for whose arrest their was a good reward. The letter was safely delivered. Lalor was injured in the arm during the fight, and it was arranged that deceased and his father should take him to Geelong. They did so. Their first stop was at Muddy Water Holes, now named Lethbridge. There was no day travelling owing to the alertness of the Police Department and proclamation were to be seen nailed on the trees throughout the whole trip offering a reward for Lalor’s capture. The traffic, says Mr Carroll, on the Leigh road was very great, and during the day they were camped alongside the road. At Murphy’s Hotel, Muddy Water Holes, whilst the party was camped, two swagmen came along, and one looked into the dray where Lalor was concealed. Having been at the Eureka he recognised him and left, it was supposed to acquaint the police and claim the reward, but was found drunk afterwards. It was necessary to make a forward move, and the journey was continued as far as the Separation hotel, some 12 miles from Geelong, which was reached at 12.a.m. The next stage of the journey was successfully completed to Geelong, where Mr Carroll’s sister and brother, conveyed Lalor to Miss Dunn’s, and then to the Young Queen Hotel in Moorabool St, which was kept by Johnny Moore. It was here that a second operation was performed on Lalor’s arm, and he stayed at the hotel until all the Treason charges had been heard in the courts, after which he was a free man.[4]

Carroll took part in the escape of Peter Lalor with his father, Patrick Carroll who was called by the wife of one of the miners, and asked if Michael would deliver an important letter for a friend, who was in the tent. "She asked me in, and on a stretcher lay Peter Lalor, with a large dish of water by his side, engaged in washing his shoulder. He explained that he had been wounded in the riots, and that he wished to get to Geelong. He gave me a letter addressed to Miss Dunn, who was head teacher at St Mary’s school at Geelong… I delivered the letter at Geelong, and then conveyed a reply to Lalor. He then asked me to conceal him in my waggon among the merchandise, and convey him to Geelong for safety. I agreed to do so, and although aware of the great risk I ran in harbouring a man for whom the Government had put a price of £500 for his head, dead or alive. I landed him safely in Geelong, and for a week concealed him in my own house in Kirk place, off Little Malop St. But this was found to be rather public, and he was taken away to a quieter locality by Miss Dunn, until the affair blew over and things became quiet once more."

In 1904 Michael Carroll was living in Ballarat. 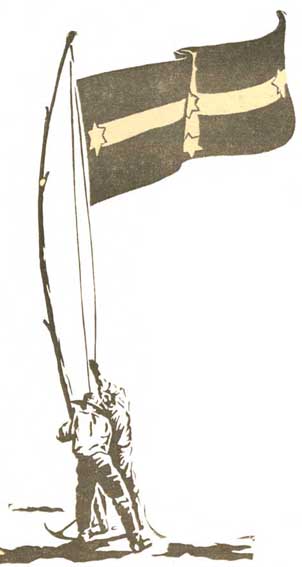 EUREKA STOCKADE EPOCH. - DEATH OF A BALLARAT PIONEER.
A message to the "Age" records the death in Ballarat, at the age of 82, of Mr. Michael Carroll, whose name is associated with the Eureka Stockade epoch. Deceased in December, 1854, then a boy of 14, was acting as assistant to his father, Who was a teamster between Geelong and Ballarat. At the close of the fight at the stockade between the British soldiers and aggrieved diggers, father and son were engaged to convey the wounded insurgent chief, Peter Lalor, to Geelong. There was a Government reward of £500 for the body of Lalor, dead or alive. 'The stockade leader, weak from the loss of blood, was as in hiding in the bottom of the waggon, covered with some tarpaulins, when deceased and his father were intercepted in the bush by mounted police, who were in search of the fugitive. They were asked to keep a lookout for Peter Lalor, and were told ot the reward of £500 for any information that would lead to his capture. The teamsters, however, were silent, and the insurgent chief was kept in his hiding place until Geelong was reached. Mr Carroll claimed to be the first white child born in Geelong. His birth occurred on April 17, 1842, nine years before gold was discovered at Ballarat. He leaves a family. A son was killed in the war. Mr Carroll was very probably the last of the Ballarat pioneers who could speak with authority regarding the trouble that led up to the now historic revolt at the Eureka Stockade. [5]

OLDEST CHILD
BALLARAT To-day.
Two old Ballarat families claim the first white child born at Geelong was an ancestor of theirs. But a third claimant seems to have settled all discussion. Michael Carroll, who died recently at Ballarat, was born at Geelong in April 1842. Mrs. E. J. Bateman, widow of a former proprietor of the Ballarat Courier, was born there in May, 1842. Now comes from Lorne the statement that Mr. Roadknight, of that place, was born at Geelong on February 12, 1830, (beating previous records by 12 years.[6]