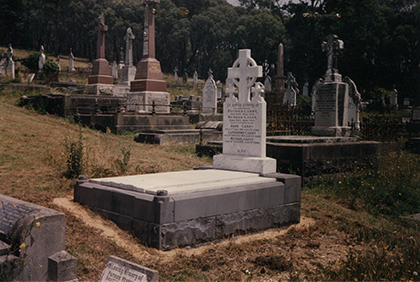 Patrick Canny was born in 1836 at County Clare, Ireland, the son of John Canny and Mary McHertney.[2] He arrived in Australia around 1852. His brother was Michael Canny, and his wife was Hannah Walsh. [3]

Patrick Canny died on 20 September 1912 and was buried in the Gordon Cemetery. [4]

Patrick Canny was wounded during the Eureka Stockade battle. Brohters Michael and Patrick were mining on the Eureka Lead in 1854. They supplied 2000 slabs and also lathes used in the stockade according to the Argus newspaper. [5]

“My brother, Patrick, who is now a farmer in Bungaree, and I were in the Stockade fight. I was a young fellow of 18 or 19 when the fight began. Teddy Moore, John Hynes, my brother, and I were standing behind a dray turned up on its heels, with the shafts in the air. It was bright moonlight, and we saw the redcoats blazing away at us. I had my own rifle, and fired several shots. I saw Captain Wise fall, and a couple of soldiers take him by the shoulders and drag him behind a mullock heap. Teddy Moore and John Hynes fell dead beside us. Then my brother was hit with a bullet, which splintered his shinbone, and he was stretched out. I had my rifle ready for another shot when a bullet pierced my right arm, went in at my side, and out under the breastbone. It did not hurt, but the blood spurted out, and scared me. I threw the rifle down, and went over the stockade fence like a deer, and ran like a racer over the hill towards Pennyweight Flat, where our tents were. In the early morning light I could see two troopers coming towards me. There were a cluster of tents near by with a break-wind of brushwood round them. I ran for them and crawled under the brushwood until the troopers passed, and then made for my tent. My sister-in-law was in the neighbouring tent and she brought a cloth and a bucket of water, and I pulled off my shirt, and kept bathing the wound in my side with water to try and stop the bleeding. Someone carried word to Dr Carr that I was wounded, and he came along during the morning and dressed the wound. My brother was taken with the prisoners, and went to the camp hospital, where he remained six or seven weeks.
We were in a great state of terror for days after the fight. All sorts of rumours were flying about that we were going to be all shot and the tents burned. On the morning Sir Robert Nickle came on to the field with over 800 men, and the field guns, two or three days after the fight, I was lying in the bunk with only my shirt and trousers on. As I saw the troops filing along the road I thought, like a young fool, that the end was near. Bare-headed and bare-footed as I was, I bolted for the bush, towards Warrenheip. My feet gave me more pain than my side, so I ran breathless into the scrub. I went back in the afternoon to the tent hardly able to walk, my feet were so badly cut. I had a bad time for months with the wound in my side. It was nearly a year before it properly healed, and I was able for work again. We lost our claim, windlass, buckets, ropes, and tools and nearly 2000 slabs which went to build the stockade, when it was burnt by the soldiers. Before I left the stockade I saw Lalor stagger and drop his gun, and stoop quickly to pick it up with the other hand, but I did not know till afterwards that he was then wounded.”[6]

Canny took up land at Ormond, Springbank. In 1904 he was farming at Bungaree. [7]