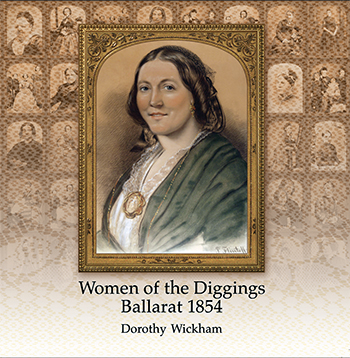 Susan Blight shown on the Women of the Diggings cover, Ballarat Heritage Services

Susan Pulford Blight and John Blight were married in Stoke Damerel, Devon, England on 11 August 1844. There is an interesting story of their journey by Sue Reid. [1] Apparently John Blight left for Australia on the Ellen leaving his pregnant wife Susan and his children in Plymouth. Susan sold his bakery business and boarded the Eliza sailing from Plymouth on 22 August 1852 with her sister-in-law Elizabeth Blight and her children. She then advertised in the Melbourne Argus each day for a week: Mr John Blight, per ship Helen [sic] from Liverpool, is requested to communicate with his wife, who has arrived in the Eliza. Address care of Dalgety, Gore, & Co. The child born soon after Susan's arrival in the Colony of Victoria was named Ellen Eliza Victoria Blight after the vessels they had emigrated upon, and the new colony in which they found themselves.

Her persistence won out and the family was reunited.

The portrait of Susan Blight by Thomas Flintoff is shown on the cover of Women of the Diggings by Dorothy Wickham.[3]

The book written by Mary Fleay Beasy gives an account of her mother Maude Glover Fleay, the daughter of Jane Watson Blight and William Glover. [4]

Some family details are also given in another book about artist Maude Glover Fleay. [5]