Henry Richard Nicholls was active with London Chartism. Nicholls was known both as a lecturer and poet before he emigrated in 1853 at the age of 23. He became assistant editor of the Gold Digger's Advocate, but unlike his editor, George Black, was an atheist. He is credited with introducing "a flavour of the cosmopolitan radical milieux" of London to the paper, with letters from the Italian republican Giuseppe Mazzini and Hungarian nationalist Lajo Kossuth running alongside Chartist poetry and editorials on republicanism and temperance. The paper failed in September 1854 and Nicholls moved to Ballarat, where he became a gold miner and correspondent for the Melbourne Argus. Nicholls died in 1912.[2] 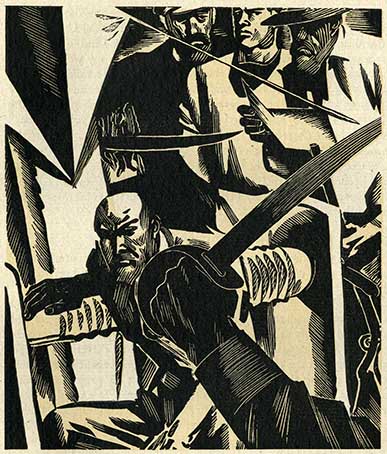 Nicholls was editor of the Diggers' Advocate newspaper with George Black, an ardent Chartist. Nicholls entered the Eureka Stockade on Friday 1 December 1854. In his written account he states that on Saturday night many stockaders were drunk.[3]

OBITUARY: Mr. H.R. Nicholls, editor of the ' Mercury," Hobart, died suddenly last evening at the age of 82 years. He has been away from his office during the last few days, suffering from an attack of influenza, and heart failure ensued. Mr Nicholls has been editor of the "Mercury" close upon 20 years, and was recognised as in the front rank of Australian journalists. "John's Notable Australians" gives the date and plane of his birth as January 6, 1830, in Regent-street, London. He was educated at Binfield (Berks) Collins' School, and the Literary Institute, London. He came to Australia in 1853, settling in Victoria, where he edited "The Diggers' Advocate." Afterwards he was mining reporter and leader writer for the "Ballarat Times;" then editor of the "Ballarat Star," and subsequently leader-writer and essayist on the "Argus" and the "Australasian" for many years, and on coming to Tasmania acted as correspondent in this state for both those journals. The element of adventure 'was not wanting in his career, for he was in the Eureka Stockade, drew up the petition for amnesty, and was elected a member of the first local court at Ballarat. Last year Mr. Nicholls was very prominently before the public, for around him centred a memorable fight in the cause of the freedom of the press. He was charged by the Attorney-General with contempt of court in connection with certain criticisms of Mr. Justice Higgins, under the heading 'A Modest Judge." But the case was dismissed by the High Court. After the verdict Mr. Nicholls was tendered a public reception at Hobart, when eulogistic reference was made to his work and his services to the community. Deceased leaves a distinguished son in the person of 'Mr. Justice Nicholls. Our Melbourne correspondent wired last night:-"The 'Argus' says that Mr. Nicholls' death removes from an active sphere in journalism one who in Victoria and Tasmania has been held in the highest regard by his colleagies of three generations."[5]

Nicholls became a member of the Local Court at Ballarat to which he was elected on 14 July 1855. [6]

Mr Henry Richard Nicholls, editor of the Hobart "Mercury," died in his 83rd year last week. Mr Nicholls was in the Eureka Stockade, and had a brilliant literary career. [7]

OBITUARY. - MR. H. R. NICHOLLS, EDITOR OF "THE MERCURY." - HIS INTERESTING CAREER.
It is with deep regret that we announce the death of Mr. H. R. Nicholls, who for the last 29 years has been editor of "The" Mercury." Mr. Nicholls, who has not for some time been in robust health, had an attack of influenza on Sunday, and early yesterday evening succumbed, at the age of 83.
Mr. Nicholls was horn in Regent street, London, in 1830. His father's house was close to Buckingham Palace, and Mr. Nicholls used often relate how, when a child, he saw Queen Victoria on her way to the Coronation. His father was an enthusiast for Democracy and Socialism, and as a youth the future editor of "The Mercury" listened to such men as Louis Blane, Kossuth, Fergus O'Connor, Robert Owen, and others. The house, indeed, was a mark of safety for political refugees of all countries, most of whom, as Mr. Nicholls used to relate, borrowed money. It was, too, a special delight to him to recall the fact that as a boy he used to take off his hat to the Duke of Wellington, who always most punctiliously acknowledged the salute. His early schooling was at Binfield, in Berkshire, and he passed examinations in Latin and French at the London Literary Institute. For some time he lectured, and wrote for newspapers, in particular for the "Leader," the editor of which was Thornton Hunt. At the age of 23 he decided to try his fortunes in Australia, and in the year 1853 reached Melbourne. He tried various things, but eventually became editor of the "Diggers' Advocate," a newspaper printed in Melbourne, and sent to the goldfields. He was not able, however, long to resist the gold fever, and went to Ballarat, in and about which city he remained for nearly 30 years. While digging at Creswick he became local correspondent of the "Ballarat Times,"' and in 1858 was offered a position on the staff. His luck at gold digging was out st that time, and he accepted the offer of £5 a week, and left for Ballarat. His mates walked half way with him, then shook hands, and they parted, never to meet again. After two years on the "Times" he was offered the position of editor of the "Ballarat Star," which he accepted, and retained till 1883. During this period he acquired an interest in the paper. While in Ballarat he contributed many articles to the Melbourne "Argus" and 'Australasian," and was a leading figure in connection with the great Victorian constitutional crisis, his articles attracting wide notice. He achieved a reputation as an authority on constitutional questions, which had remained with him ever since. His "Bush Sermons" and "N Papers," and other articles over the norn de plume of "Henricus," were much commented upon. In 1867 he published "Politics in Verse," dealing with the political affairs of tho time. He stood for Parliament at the general election which resulted from the "crisis," but was defeated by a narrow majority. '
In Ballarat Mr. Nicholls did a great deal of valuable work in connection with the mining industry. He was there at the time of the Eureka Stockade, but withdrew before the attack took place, because he realised that defence was hopeless, and did not approve of the methods adopted for remedying what he recognised to be hardships and injustice suffered by the miners. When the Ballarat Local Court was established afterwards to deal with mining cases, Mr. Nicholls was selected as one of the first members. It was he who first advocated that mining companies should be held responsible for accidents occurring as a result of neglect of proper precautions. He put forward his ideas in 1860, when he read a paper at a meeting of the Ballarat Mining Institute This principle was adopted by the Victorian Parliament, and later on in all the other States. It was he, too, who suggested the "no liability" system for mining companies, and kept hammering away until his efforts were crowned with success.
In 1883 Mr. Nicholls was appointed editor of the Hobart "Mercury," in succession to the late Mr. James Simpson, and remained in that position till his death, actually writing his last leading article on Sunday. In that 29 years he did many notable things, and by his vigorous writing helped to guide public opinion through the clash of parties and the stress of political strife. "Last year he came into especial prominence through being summoned before the High Court of Australia to answer a charge of contempt of the Arbitration Court. It will be remembered that the case was dismissed, and the High Court gave a judgment defining contempt, and limiting its application, which makes The King versus Nicholls a leading case of extraordinary importance to the press of Australia. In June of last year a number of leading citizens formed a committee to arrange for a public reception to Mr. Nicholls, and the presentation of an address. The idea was taken up with the utmost heartiness, and on June 27 the Town Hall was crowded with people representative of every class in the community, who thronged there to do him honour. At the gathering letters and telegrams were read from the editors of the leading newspapers of Australia, expressing their admiration for Mr. Nicholls, and their appreciation of his work.
Mr. Nicholls, whose wife died only a few years ago, leaves a family of two daughters and six sons, of whom Mr. Justice Nicholls is one. Two of them are in South Africa. [8]